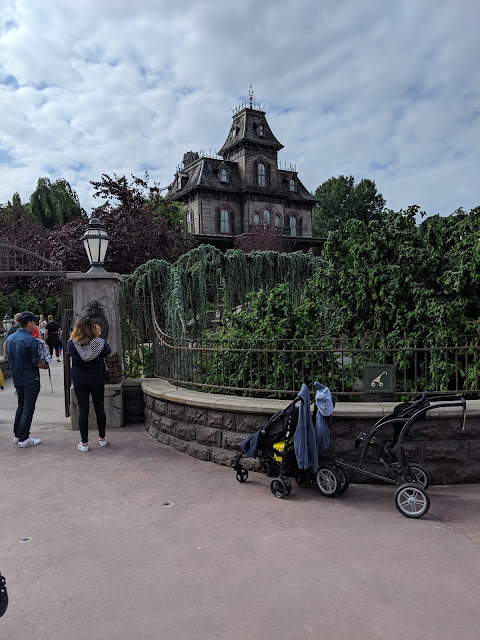 We spent most of our time at Disneyland Paris trying to take in some experiences that felt familiar (walking down MainStreet, etc) and some that are unique to the Paris parks.  One of those unique experiences that we took in during our visit was a ride through the Phantom Manor in the Frontierland section of Disneyland Park.  Phantom Manor is the close cousin of one of our favorites:  Haunted Mansion.  AllEars.net has a nice feature on Phantom Manor.  From that AllEars piece (go read the whole thing here):


Phantom Manor is Disneyland Paris’ version of the Haunted Mansion. It is neither better than nor inferior to its cousins around the world. It’s simply different. And these differences make it very intriguing for those of us familiar with the original version.

Phantom Manor has a more complete storyline than the Haunted Mansion. It goes something like this.

Henry Ravenswood made his fortune in the Big Thunder Mountain gold rush. With his money he built an elegant Victorian manor high atop a hill, overlooking the town and mine that made him rich.

Ravenswood was very possessive of his only child, Melanie. When Melanie became engaged to a local miner, Ravenswood swore he would stop the wedding at all costs. But before he could enact his plan, an earthquake struck Thunder Mesa and Henry and his wife Martha were killed. Melanie survived.

Locals believe that the Phantom, who now inhabits the house, is actually the dead Henry Ravenswood and he killed his daughter’s intended from beyond the grave. You can see the groom’s dead body hanging in the “stretch room.”

After the death of her fiance, Melanie wandered the manor, dressed in her wedding gown, for the rest of her life and after.

The story is interesting.  The ride itself is interesting, but if you want a hot take, here it is:  I like Haunted Mansion better.

There are similarities and they *do* sandwich in the Grim Grinning Ghosts song, but I think the Haunted Mansion experience is a better one - and not to mention when the Nightmare Before Christmas overlay is in place, the on at Disneyland is tops.

The part of the experience that seems the most meaningfully different - in a better way - is the queue.  You kind of wander up stairs and around gardens.  And the gardens are really spectacular.

Check out the photo at the very top of this post.  You can kind of see how lush the gardens are and how they're stuffed full of interesting plants and trees.  All of them are contorted or appear decaying or are weeping in some way.  It is an interesting look to see a landscape FULL of these type of plants.

One of the trees that stood out to me was this thing below.  It is a contorted/gnarly tree that has foliage that appears to be decaying/dying on the limbs.  I don't know if this photo really shows what you see with your naked eye.  The leaves are all curling and look suffering. 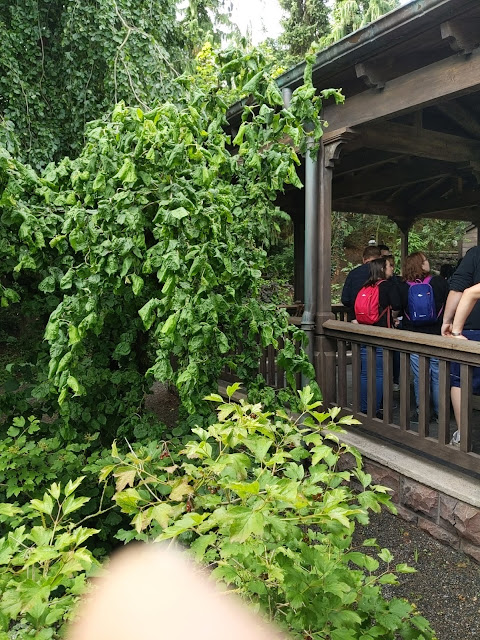 And the tree is all curly and contorted. 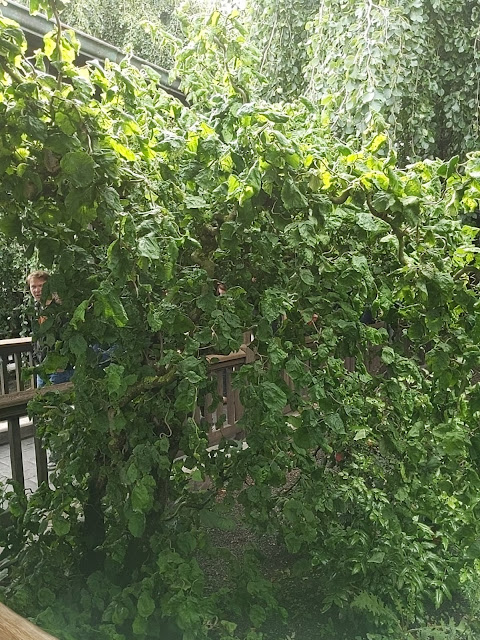 Here's one of the trees that either has died or hasn't come out of dormancy yet. 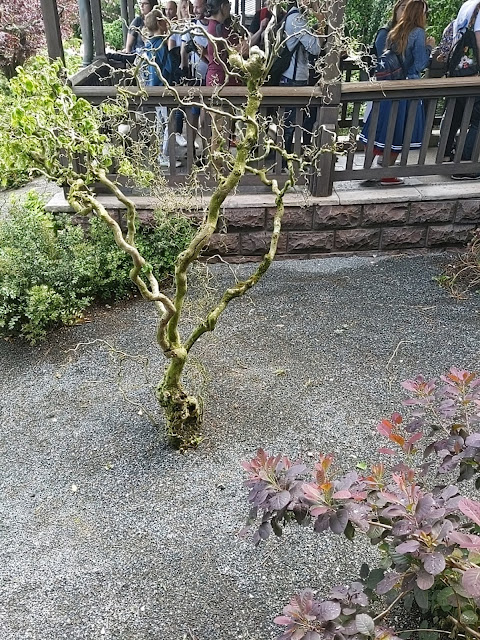 I pulled out my phone and tried a couple of apps in an effort to try to identify the trees.  Neither worked properly.

But, a little bit of searching on the web, I think I've figured out what these are:  They're either Contorted Filberts or Harry Lauder's Walking Stick trees - which according to the Missouri Botanical Garden - is the *same* tree.  From MBG:


‘Contorta’, commonly called contorted filbert, corkscrew hazel or Harry Lauder’s Walking Stick, is a contorted version of the species plant. It was discovered growing as a sport in an English hedgerow in the mid-1800s by Victorian gardener Canon Ellacombe. This plant was subsequently given the common name of Harry Lauder’s Walking Stick in the early 1900’s in honor of Scottish entertainer Harry Lauder (1870-1950). It is a deciduous, rounded, multi-trunked shrub which typically grows to 8-10’ tall, and features, as the cultivar name suggests, twisted and spiraling branches, twigs and leaves. Most plants sold in commerce are grafted. Occasional ungrafted specimens do not require pruning maintenance because they have the advantage of producing contorted root suckers. This shrub is particularly noted for its winter beauty (contorted branches are best observed in winter when the foliage is absent plus late winter flowers add interest to the landscape).

It is zoned all the way down to Zone 4, so it is something we can grow here in Downers Grove.  And...did you read that?  Winter beauty?!?  Yes, please.

Thinking this should go on my 'tree wish list'/tree dreaming list?

What else is on that dreaming list? Another columnar conifer like this Columnar Norway Spruce.  And something I haven't posted about here on the blog, but want (and should post about!):  a columnar Ginko fastigiata.
disney disney parks Disneyland Paris paris tree dreaming tree wish list trees trees in Disney Parks
Location: Boulevard de Parc, 77700 Coupvray, France