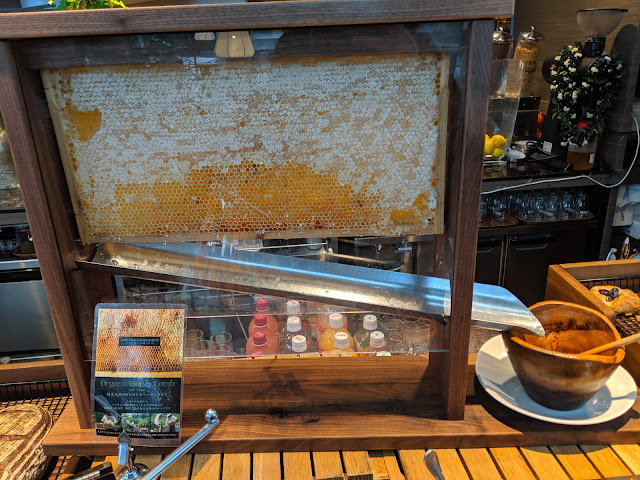 I stayed at the Tokyo Marriott on a recent trip for just one night, but this was the second time I stayed there.  However, this was the first time I had time for breakfast.  The previous trip, I had an early departure time and had to run out before breakfast.    At this Marriott - which has some terrific gardens that I'll post about another day here on the blog - is a converted hotel, so it wasn't built as a Marriott.  So, the layout isn't traditional, or at least traditional in my mind when it comes to a hotel layout.  The check-in desk is buried about half-way "back" in the hotel and is small and cramped with a low ceiling.

In "front" of that check-in desk area is a giant atrium.  In the center of the atrium is the restaurant where they serve breakfast.  It is free for certain Marriott Rewards Bonvoy Members, so when I showed up, there were plenty of folks eating there.  The breakfast offerings are pretty robust and they have quite a few Western choices on top of the various Japanese items.  But, but, but...I'm not here to talk about the omelettes or the rolls.  Nope.

The setup that you see above in this post is for honey.  And it stopped me in my tracks.  I had not seen something like this in a self-service position in a restaurant and thought it was pretty incredible.

If you peep at the photo, I think you can figure out what is going on:  there's a big slab of honeycomb that they've set up between two pieces of glass.  Underneath the comb is that silver channel/slide that emerges on the bottom right of the contraption and empties into the wooden bowl you see on the far right.  In that bowl is a honey dipper that you can use to apply honey on toast or croissants or other breakfast what-have-yous.

I mean....doesn't that setup just make you want to eat some honey?  I wasn't planning on eating honey for breakfast, but when a restaurant goes through this process to provide - what I can only assume is - excellent honey, you have to go out of your way to eat it, right?

If I get back to the Tokyo Marriott Hotel in Shinagawa, I'll be getting the honey again.
breakfast breakfast foods honeycomb japan local honey Marriott tokyo
Location: Shinagawa-Ku 4-7-36, ７ 北品川 Shinagawa-ku, 東京都 140-0001, Japan