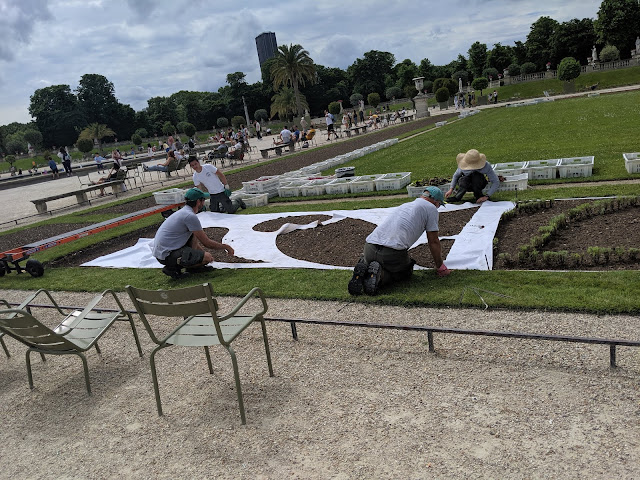 On one of our visits to Luxembourg Gardens in Paris, we came across a crew installing some flower beds in the main area that is just north of the little circular pond where kids launch those sail boats.  You can see that they're using this white fabric template to put down flowers in a pattern, but you can also see that on the right of this photo, they use the template to just make outlines.  After that, they fill them in with (usually) one color.  As this was happening, we stopped to take it and looked around at some of their stuff.  One thing that I saw that grabbed my attention was their use of cocoa bean hulls as mulch.  They had bags of the stuff lined up ready to be installed after the flowers go in.

I had come across Cocoa Bean Hull Mulch in bags at Menards, but didn't give it much thought.  Until now.  After we came home, I went off to Menards and picked up a bag of the stuff to see what it was all about.  Of note, Cocoa Bean Shell Mulch is toxic to dogs.  Just like chocolate is toxic to dogs.

So, I figured, I'd be thoughtful about where exactly we put this stuff down.  With this test bag, I was just going to put it on two small tree beds - our Magnolia out front and our tiny Bald Cypress out front.  Both of them...far removed from the sidewalk and both of them in the front yard where our own dog doesn't spend much time.

The bag that they sell at Menards can be seen below in the photo.  Of note, check out the place it is packaged:  Hull Farm in Lake Geneva, WI. 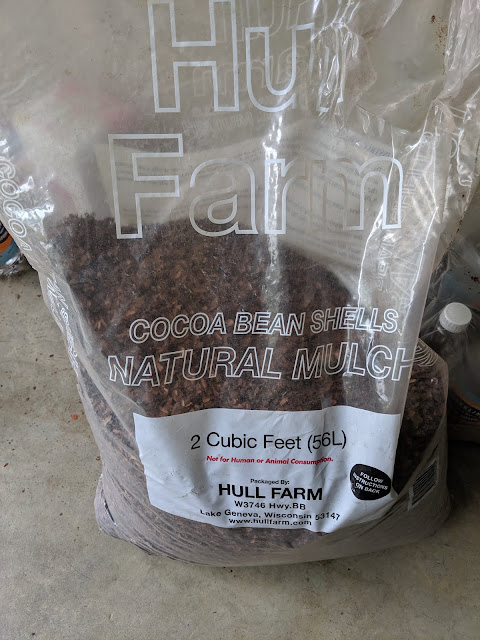 Well...that's close! A quick search and it turns out this place is like 15 minutes away from the Lakehouse.  Wonder if they sell to the public?

I opened the bag and dropped about half of it into a tub so I could look at it a bit closer.  It is really quite interesting.  The shells are very lightweight and dry.   Very different than normal mulch. 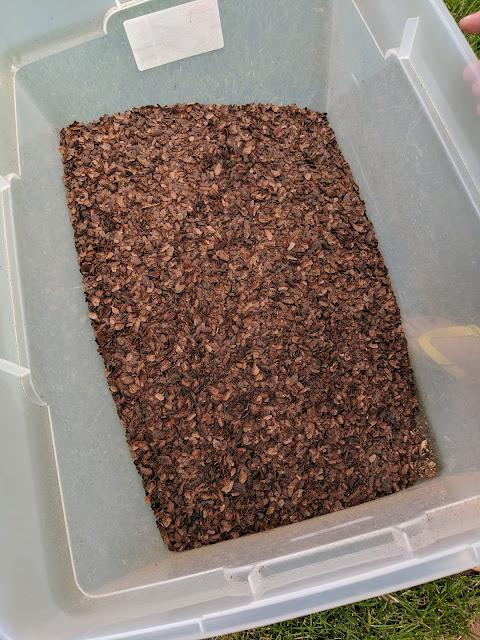 The obvious toxic for dogs aspect aside, there's a lot to like about cocoa bean shell mulch.  First, it is an organic, repurposed material.  These are a byproduct of the chocolate-making process.  There aren't any trees that are cut down and/or shredded directly for this mulch to exist.  The way that they bind together to create a sort of 'mat' is interesting and should provide some nice anti-weed benefits.  And based on what I saw in the Parisian gardens, it is quite a looker:  I think it looks BETTER than most mulches and it seems to have some persistence.  Sure, it breaks down like any mulch, but according to what I found on the Web, it actually gets DARKER as it ages.  Not lighter like every other mulch.

Like I said earlier, I was going to test this stuff in a couple of small areas that I didn't think both my dog and neighborhood dogs would deal with in any way.  Below is a photo that shows the little Bald Cypress tree that we planted last year.  I had applied some bagged mulch on top of the tree base when we planted it, then earlier this Spring, I grabbed a tub of mulch from the Village of Downers Grove to test out (it was wood chips, not so much mulch, btw...).  On top of those went down these Cocoa Bean Shells.  And then, per the instructions, I watered them in heavy. 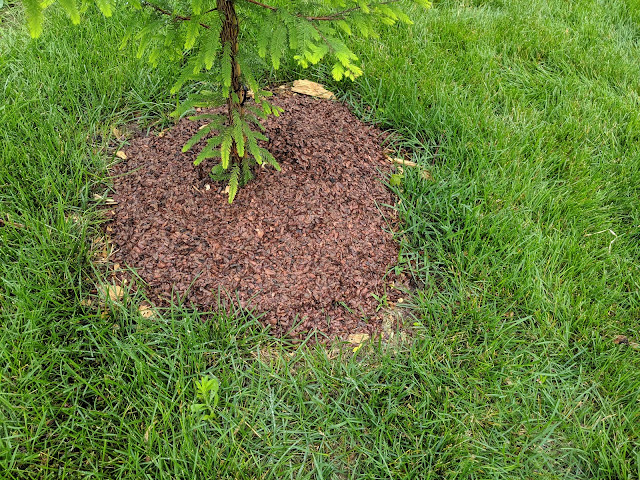 This bed needs to be edged, but you can get a sense for the color and texture.

Here (below) is a cropped version of a zoomed-in look at this same photo:

I like the stuff and I'm wondering if I can go find the Hull Farm in Lake Geneva to see if they'll sell directly to the public.  If they do and the cost is less than what they sell for at Menards, maybe I can try our entire front beds with this stuff?
Bald Cypress Cocoa Bean Shell Mulch garden diary gardens Lake Geneva Luxembourg Gardens menards mulch paris Paris Gardens