No Two-Finger Point At Disneyland Paris 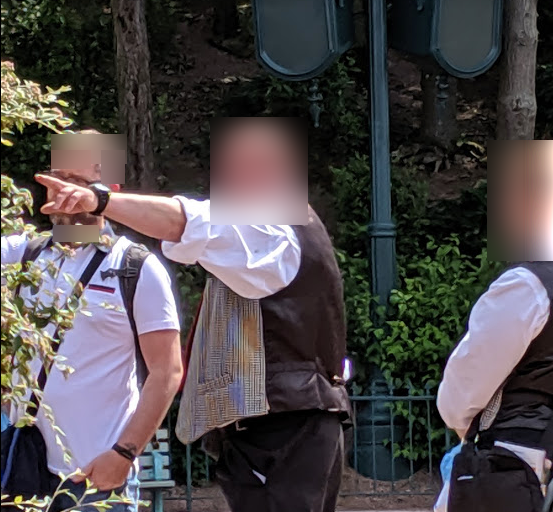 There are a ton of familiar details at Disneyland Park.  The hub layout.  The castle...that is kind of a combination of Disneyland's castle at Disney World's scale.  But, I noticed one little detail that is different.  They don't two-finger point.  This is a photo I took of this Cast Member who was directing people around Disneyland Park.  I was sitting at a restaurant waiting for Nat and was able to watch this guy tell people where to go and what-have-you.  After seeing him one-finger point for about five minutes, I had to snap a photo.


Disney is all about the details.

Sure, every Disney fan knows that the rides, snacks, and the parks themselves are meticulously designed and maintained so visitors can be delighted at every turn, but did you know that this very thoughtful mentality also extends to the park’s staff as well?

Take, for example, the fact that Disney park employees are banned from ever pointing with just their index finger.

Sure, it may seem like a minute detail, but as it turns out there are two distinct conspiracy theories on why park employees are mandated to do the “double Disney point,” including Walt Disney’s smoking habits and simply being polite.

As the Independent explained, the two-finger gesture is likely still used today because a single pointed finger can be interpreted as rude to several cultures, including in the United States.