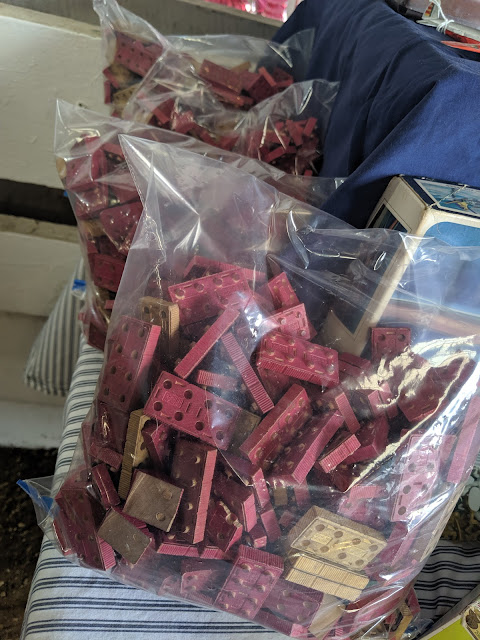 At the Elkhorn Flea Market up in Wisconsin, I came across this American Bricks Building Set of red and brown bricks.  They're Lego-like, but they made their appearance twenty years prior to Legos making an appearance in America.

This Google Arts & Culture page is really awesome.  It is from "The Strong National Museum of Play" in Rochester, New York.  Details from there:


The Halsam toy company of Chicago offered the first sets of American Bricks construction sets made of wood in the 1940s. The interlocking stud and socket system that held the bricks together was similar to the blocks in LEGO sets that arrived in the United States in the 1960s. The American Brick pieces were grooved on the outer face to resemble the texture of bricks.

I think that the vendor wanted $30 for a few bags of them, so they weren't cheap.  And because of the price, it was easy to invoke my collecting mantra and pass on them.  Say it with me:


It is enough to enjoy the existence of things without possessing all of them.