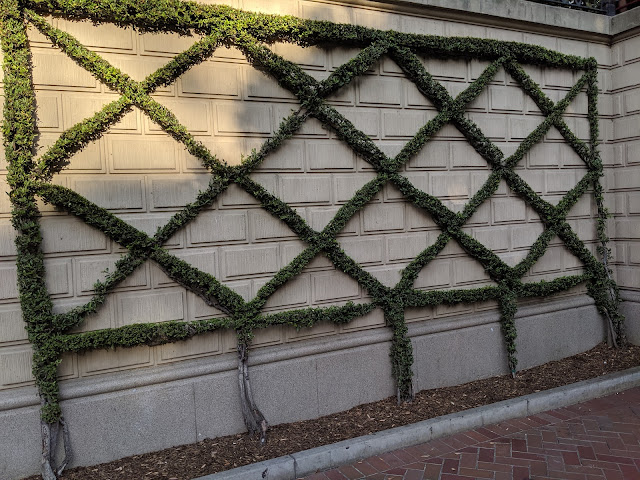 Back in January, I posted a photo showing off a Belgian Fence espalier that I fell in love with during a visit to Disneyland in Anaheim.  During a recent trip to Southern California, we ended up going back to the park and I found that same espalier.  I wanted to see if it had changed at all during the six months since we had seen each other last.   That's it in the photo above during the end of July.  And while there's some thickening-up of the branches, it is mostly the same as we last saw it.  Due to their climate, one would think that there isn't much seasonal differences, right?  They certainly get some growth in Spring and Summer, but Winter dormancy in Los Angeles isn't quite like what it is here in Zone 5B.

Seeing this again, only enhanced - in my own mind - my desire to bring a Belgian Fence to our property.  It is #2 on my 2019 To-do List, but here we are in (almost) mid-August and I haven't even acquired the trees.  That isn't to say that I haven't been looking for them.  I think I've decided to do my first Belgian Fence with fruit trees and my two local Home Depots have plenty of small ones.  The problem is that they haven't dropped the prices on them to the point where I would buy.  They're small caliper ones (3/4", I think) that retail for $35.  They've dropped them to $17.50.  And, I think mostly forgotten about them because they're looking a little ratty.  I need eight of them.  So at $17.50, that's $140 before tax.  I believe that Home Depot would stand by them for a full 12 months, but they would only give a refund, not a replacement tree.  So, if one or two of the eight don't make it this Winter, I'd be back at it with full-price trees in the Spring.  Not to mention that the trees that are available aren't ideal varieties.  They're kind-of...'take it or leave it' trees at this point.  And right now, I'm leaving them.

On our trip back in Fantasyland, I also found this other Belgian Fence near It's A Small World that is up on a little stage that I *believe* that they built to help people see the parades as they pass by on this route.  That little stage area wasn't very crowded (non-parade time!) and it was a nice little respite location while Nat and one of the kids went to the restroom up the hill a bit.

You can see it below - they color-coded the wall to enhance/compliment the Belgian Fence. 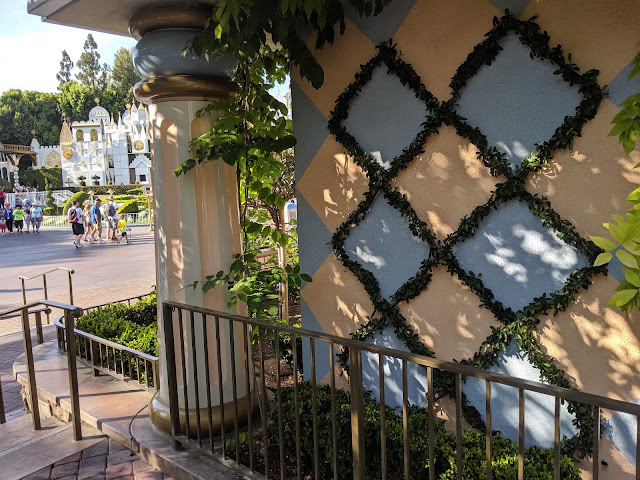 I'm pretty sure this is pyracantha that is being trained up the wall, but I didn't look too close.    I mentioned it in my 2019 "To Do List", so, perhaps I confirmed this (at least in my own mind) on our last trip.