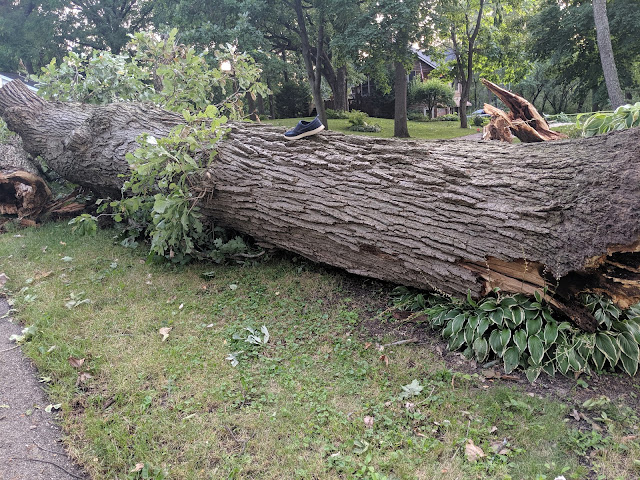 This mighty Oak tree came down in what is being billed as a "Microburst" storm up in Twin Lakes, Wisconsin last month.  We arrived the day *after* the storm.  Or...I suppose, the day *of* the storm since it hit at like 12:30 am.  The folks at the Kenosha News covered the aftermath and concurred with a meteorologist who billed the event a microburst.


A small area of Twin Lakes was hit by high winds that took down trees and left many residents without power early Thursday.

...Aidan Kuroski, a meteorologist with the National Weather Service in Sullivan, said that a “microburst” storm with straight line winds estimated at 70 to 80 mph hit the area at about 12:30 a.m.

“It was a very concentrated area,” Kuroski said. “Basically from Elkhorn and Walworth County down to Twin Lakes.”

Kuroski said the storm developed so quickly the National Weather Service did not have time to issue a storm warning.

The storm produced some damage around the neighborhood, but none more significant that this mighty Oak Tree that was right next door.  Scroll back up and look at the top photo again.  I put my little slip-on blue sneaker on top of the tree to give you some sense of the scale here.  4 feet or more in diameter, I'm estimating?  And 50 feet tall once you factor in all the limbs and branches.  The trunk itself was probably over 40' tall.

The tree just snapped at the base.  Must have been some rot at play, right?  Trees don't just snap in half - even in 80 mph winds.  And, one of my favorite trees - that I've posted about over the years here on the blog - the Live Oak - has a natural defense against toppling over.  Their roots grow together and they help each other stand tall.  I posted about Live Oaks for the first time in 2010 on a visit to Boone Hall Plantation outside of Charleston.

I laid my hands on this beast - after it had been moved from on top of the power lines - and before the professionals had gotten started carving it up into pieces to be processed.    What took 150 years or so to grow was felled in one night. 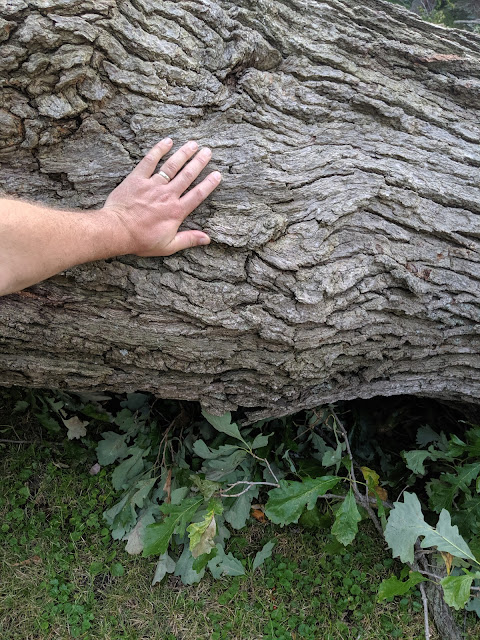 The entire neighborhood is littered with giant Oak trees that are of similar age or older.  I have to wonder if someone was a little Johnny Appleseed with Oak trees back before our country was founded and Wisconsin was settled or if the Natives cultivated Oaks along the shores of Elizabeth Lake?

I found this online pdf version of a book on the Wisconsin DNR site entitled:  Every Root An Anchor: Wisconsin's Famous and Historic Trees.  A quick search finds some mentions of both Twin Lakes and Kenosha County.  Will be digging in a bit on our next weekend trip up there.

Also...for those keeping track at home, I covered storm damage of a tree before here on the blog:  all the way back in 2010, I posted photos of our little pear tree that had been snapped in half during a storm.   That tree recovered well - within a month or so, it had already shown signs of new growth.  And within a few years, it had shot back up even bigger and stronger.