We Went To The Black Spire Outpost At Star Wars: Galaxy's Edge 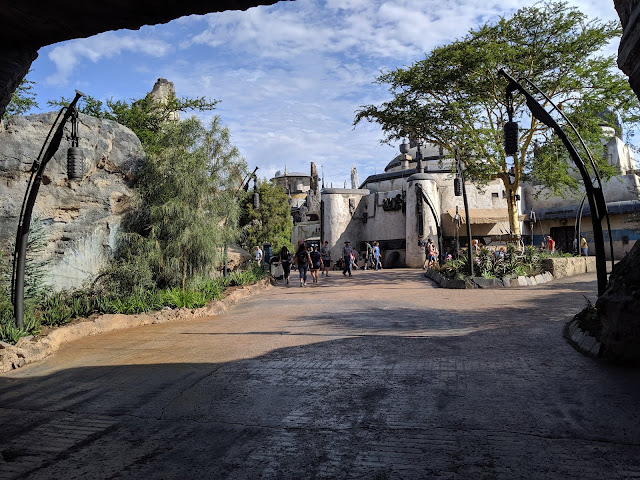 Back in April of 2018, I posted this photo of one of our kids celebrating the upcoming Star Wars land at Hollywood Studios.  Go check it out here.  That land is currently open to cast members and will be opened to the public before the end of the month.  But, being "Disney People" (with air quotes), we couldn't wait for that and had to squeeze in a visit to the California version of Galaxy's Edge/Black Spire Outpost/Batuu/Star Wars Land1 during our recent trip to the park.

And we really liked it.  There's only one ride open (The Falcon) and yes...everything is expensive.

But, the imagineers really did an amazing job on the land.  It certainly feels *immersive* and that seems to be all the rage these days.  Now, we haven't been to Universal Studios to see any of the Harry Potter land(s), but what I've read about it, that word (immersive) comes up over and over.  And, between Pandora in Animal Kingdom and now SWGE, I think that Disney - and imagineering - has answered in a full-throated manner that they, too, can do immersive environments.

I suppose the first time I was knocked out by a 'land' at a Disney Park was when we walked into Carsland2 in the evening.  Like...knocked out.  Nat and I both swooned over our stroll down that street for the first time.

Now, I will tell you:  I didn't get knocked out the same way with SWGE on our first visit.  But, we really liked it.  And, before I talk more about good/not good stuff, let's properly caveat this experience.

1.  We did NOT go into the land in the evening.  If you've ever been to any Disney Park, you know that they take on a different life of their own when the Sun goes down.  And Disney Imagineering seem to really excel at low-light, nighttime experiences.
2.  As I said earlier:  they had just one ride open.  Not the epic 3-rides-in-1 Rise of the Resistance that will come later this year in Florida and next year in California.
3.  We only went one day.  Welp...part of a day.
4.   It was hot on the day we visited.   That makes for a not-ideal experience.

We entered for the first time via the entrance to the land just past Big Thunder.  And I think that this is the *best* entrance.  You are the closest to the Falcon (I think?) and you make a couple of turns and then....WOW...you see the real thing.  The Millenium Falcon.  It is kind of sitting up on a pedestal.  Up a few steps.  And larger than life.  Or...in this case:  actual life size. 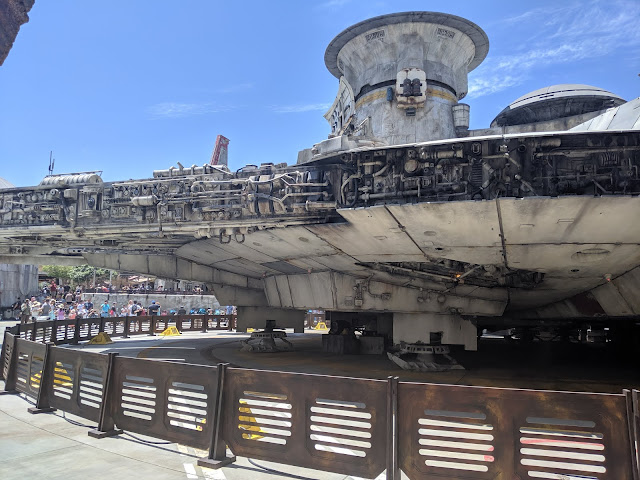 If you look in this photo right above, you'll see that there's a fence that keeps you from getting too close to the Falcon.  But, I didn't really even mind it or notice it.  And you can get a really great photo of yourself in front of the Falcon without the official photographers.  Here's a photo of Nat and her Sister and Dad along with a couple of kids to give you a sense of the Falcon.  (I blurred out everyone here because I didn't ask them if I could post this...so just being cautious.) 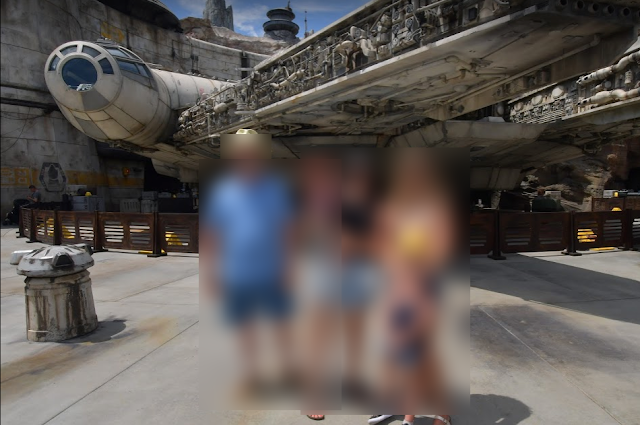 We also entered the land - for a second time - via the entrance in Critter Country - just past Splash Mountain.  And that's the angle of the photo at the VERY top of this post.  This is the "Resistance Forest" side of the land and where the 2nd ride (Rise of the Resistance) will be and isn't quite as "cinematic" of an entrance.  Because the ride isn't open over there, there also isn't much to do, so...as you can see from my photo, it was less crowded.

So...loved the Falcon on the outside.

And on the inside.  We wandered around the little waiting room and found some time to sit the kids down at the chess table.    And the ride was fun.  The kids loved it.  I was a "gunner" while the two littlest ones were both "pilots". 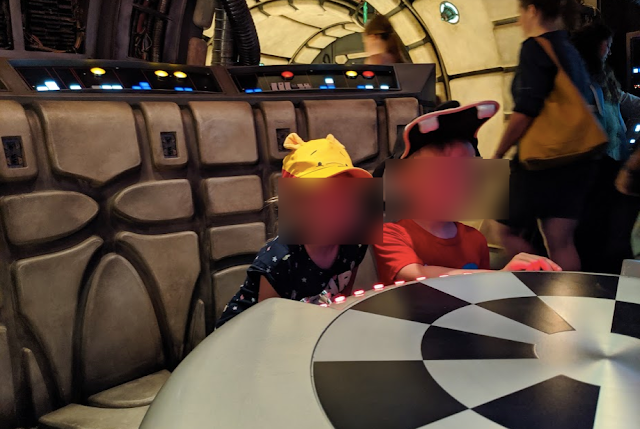 But, what didn't we love?

First, I know it *is* Disney and this is a brand-new land, but the prices of things were crazy.  We had lunch in Docking Bay 7 and the food was, interesting, but the prices were quite high.

Then, it feels like there are some things missing?

Where are the roaming droids?  I thought we'd get more of that, right?  Add some of that famous Disney "kinetic energy"?

And what about that whole LARP'ing stuff?  You know...crash the Falcon on the ride and the guys in the stores will give you the business?  That didn't appear to be happening AT ALL.

And...like I said earlier, there was much of the land that we didn't experience (Oga's, nighttime, etc), so perhaps our experience isn't quite representative of the full Galaxy's Edge experience.

Perhaps both of these things mentioned above (LARP'ing and Kinetics) are on their way when the full land opens in California.  Or, maybe there are other surprises in store for us when the one in Florida opens to the public.

1. [The place has A LOT of names.  What should we call it?  SWGE, maybe??]↩
2. [Carsland, too has more than one name, right? I mean...I just called it Carsland in this post. But, it is also "Radiator Springs", right? Maybe this is a trend with Disney Parks?]↩
california disney parks Disneyland Galaxy's Edge star wars
Location: 1313 Disneyland Dr, Anaheim, CA 92802, USA