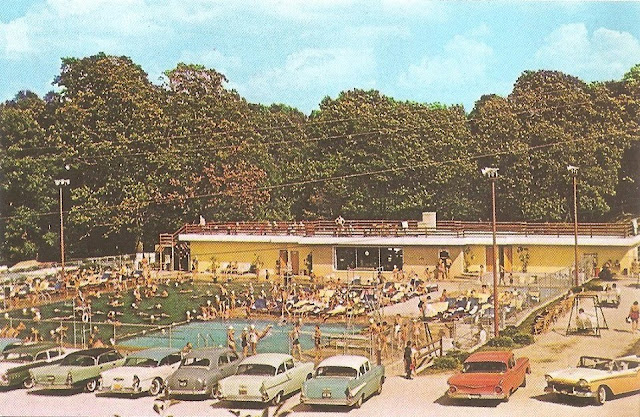 I came across this photo of Valley View Pool - later named the Frankfort Township Pool through a friend who found it Via Frankfort Deleted on Facebook here.  That photo above is NOT mine, it came from Frankfort Deleted - which is run, I think by Pam Biesen, a mother of one of my grammar school classmates(!!) - who I presume got it from somewhere else.

A few things about the pool that jump out to me from the Summer of 1959:

1.  the layout of the actual pool is the exact same as it was when I swam/worked there.
2.  I *think* there's two diving boards - low and high - but they're different than the ones we had.
3.  The color of the water appears very different between the shallow end and the diving well.  Painted bottom is different?  I don't think it was like that in the 1980's and 1990's.
4.  The roof deck is in use.  They had basically shut it down when we went there.  Safety reasons, I'm assuming.
5.  The 'chlorine tank room' that was behind the diving boards isn't there.
6.  Neither is the little shed garage that I think must have been added on the right where the towel/basket room was located.
7.  I'm pretty sure the concessions area wasn't built in this photo.  Where those cars on the left of this photo are located would have, I think, been inside the concessions fence.
8. The way the people are sitting on the deck is kinda weird.  There appears to be navy blue deck chairs?  And then there's that wide 'path' on the deck on the right where nobody is sitting?  When we went there, people seemed to stay AWAY from the edges of the pool and the Moms kinda sat back towards the fence.  Here, they're crowded right up to the edge of the pool.
9.  People appear to be floating on things.  There was a strict no-floatie rule during the day. Some nights, when it was dead there, they'd throw out some inner tubes.  Those were the salad days!  I remember begging the guards to let us have them when there were like 5 people in the whole pool.
10.  Is that a 'beach' on the right side of the photo?  Along the fence?  I see what looks like a bench swing and then some other things.  Chairs?  I'm not sure.  Maybe that's just dirt that the lady is walking on?  But, by the time we got there, that was paved over and people parked cars there - between the fence and Route 30.
11.  I'm pretty sure that the ladies are wearing bathing caps.  That was a rule during my day, too.  Kinda weird, but I guess a relic of the past.  Today, nobody wears caps.

Anyway...Back to the Summer of 1959.  Look at those bathers all care-free.  How neat, right?  So much fun taking place at Valley View back then.

As I mentioned above, I have a connection with the photo and the pool.  My time with Valley View Pool started much later.  Like in the early-mid 1980's.  I started with swim lessons when I was four of five years old with my Mom.  Then, because my sister was doing it, I joined the Valley View Gators.  Swam on the 'eight and under' team to start and I *think* I made it all the way up to 11/12 - or about 5th or 6th grade.  Then I stopped for some reason.  My Sister kept going and ended up being a really great swimmer.  She's up on the Wall of Fame at Lincoln-Way Central for being (I think??) a State Champion.  (and side note...she's on the original Wall of Fame at Lincoln-Way Central.  The one in the very *front* hallway of the main Central Gym.  That, once, they built the field houses, we didn't really use much?  Now...that I'm thinking of it, I wonder if they moved those?

Anyway, back to the Valley View pool.

Besides swim lessons and the swim team with the Valley View Gators, I also spent a lot of Summers there - first goofing around as a kid.  And then as a teenager with my first few jobs.  The Summer after my Freshman year of high school, I caught on at Valley View pool as a 'Clerk'.  The pay was terrible (I made $3.85 per hour - which was less than minimum wage -  at the time was something like $4.25.  They were able to pay us less than minimum wage, I think, because we only worked something like 25 hours a week.) but the times were tons of fun.

There was basically three tracks of jobs at Valley View:  Lifeguards.  Clerks.  And then Morning Men.

Guards did what you think they did.  Twirl their whistles.  And watch the pool.
Clerks were there to keep the place tidy, do the operations and enforce the non-pool rules (WALK!!!)
And Morning Men were these - seemingly older guys - who arrived early and left before the pool opened.  They tried to keep the place running and maintained.

I started as a Clerk - and that meant cleaning the locker room (which, by then in 1993 - people were mostly ignoring the whole "Nude Soapy Shower" sign.  I mean...come on, that's funny, right?   Having a sign in the Men's locker room that reads:  You Must Take A Nude Soapy Shower Before Entering The Pool.  Kids just ran right thru the locker room when they got there and jumped in.  Most kids came with their trunks on.  And on the way out, most just went home in their trunks.

There was a rotation for clerks - I don't remember it totally, but it involved working the basket desk - the pool had a system where you could put your gear in a basket and get a little bracelet with a number on it while you swam - and could pick up your gear on your way out.   Then there was cleaning/sweeping the concession area, too.  So, there was at least 3 jobs.  Might have been an office job (checking people in), too?  I don't remember.

But, I did that for a Summer or Two and had the time of my life.  Valley View Pool - or Frankfort Township Pool because the center of our Summer lives.  The other employees there were "pool people" and were our friends.  I think that a lot of the life guards (like my sister Vic) were on the Gators in the morning, taught swim lessons before the pool opened and then worked as Guards during the day.  Nice little racket, I think.

At some point, the Morning Man job opened up.  There were two roles and one was occupied by a legend:  Jared Locke.  He was a few years older than me and was a STAR of the Lincoln-Way Basketball program.  Starting big man.  And a stud hooper.  I mean...I totally looked up to him.  I'm not exactly sure how the *other* Morning Man job opened, but I landed it and started to work with Jared.

I learned a lot on the job from Jared.  He was really great to me - but I also picked up something else that first Summer with him:  Howard Stern.  There I was, a newly-minted 16 year old with my drivers license showing up to work everyday.  And what did Jared do?  He had a little radio that he carried around and we listened to Howard Stern. I think he was on 105.9FM at the time.

I had never heard of Stern.  Let alone listened to him.  But, I was hooked.  Sure, I went away from Howard during my 4 years in Champaign.  But, I came right back once I had a commute.  And I listen everyday ever since.  And that's because of Jared Locke and the Valley View Pool.

There's a ton of history about Valley View Pool - and Valley View Farms.  But, it is all gone now.  Turned into an administration building for the Frankfort Township bureaucracy.

We don't live in Frankfort any longer, but I do know that the community is still without an outdoor pool today.  I guess that's not that uncommon?  Downers Grove doesn't have a public pool, either.  We have to go over to Clarendon Hills and buy a non-resident family membership to swim with the kids every Summer.  Maybe one day that will change?
First Jobs Frankfort illinois from my childhood Valley View Valley View Pool
Location: 11000 Lincoln Hwy, Frankfort, IL 60423, USA