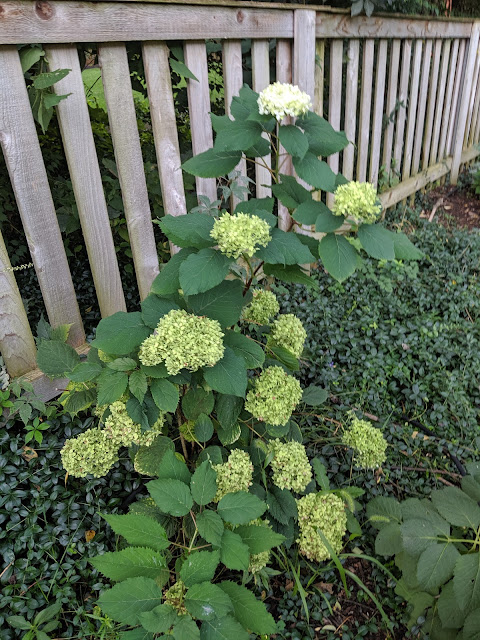 Above you can see what I've been calling our "Teardown Hydrangea" in its current state in the Fall of 2019.  I've documented this over time here on the blog since "acquisition" to today.  Starting with the beginning, in October of 2017, I dug some plants out of a yard down the street before they were tearing down a house to build.  In that bucket of plants was a hydrangea that looked really ratty.  Dry and unhealthy.  I didn't have much faith that it was going to make it.  And...frankly, I wasn't really certain that it even *was* a hydrangea!

Surprisingly enough, it survived the Winter and came back in Spring of 2018.  By last August, it has grown a bit and even flowered with a handful of blooms.  If you look then, this was the first time that it was showing off any lime-color in the flowers - which helps point me in the direction of the variety.  They're not (at least now) cone-shaped, but more ball-shaped.  I think that might mean that they're NOT Limelight Hydrangeas, but there's no certainty yet.  They *might* be Little Lime (check out the photo here), but again...no certainty.

There are about 15 blooms on the plant right now - which is a 3x or so increase year-over-year, but the plant itself has also grown.  Last year, it was more stout and compact.  This year, it has taken on some height (along with the blooms) and is legging upward.
#hornbeamhill backyard flower beds flowers garden diary hydrangea southside teardown hydrangea
Location: Downers Grove, IL, USA