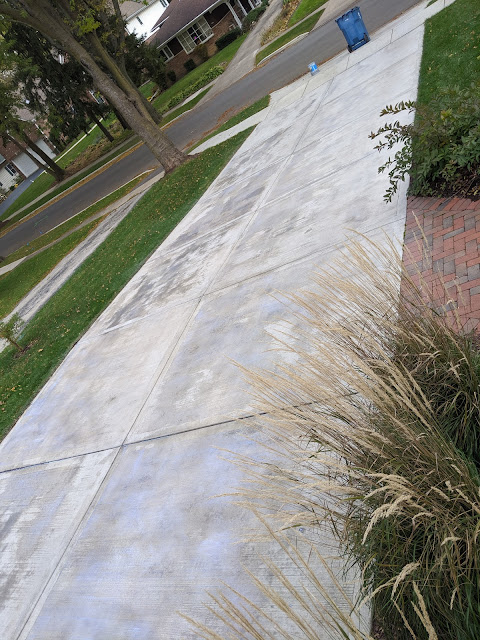 This photo above - of part of our driveway - is a few weeks old, but I wanted to drop this down here on the blog, so I could refer back to it in terms of house maintenance.  When we built the house, the concrete guys laid down a nice thick concrete sealer on top of our brand new driveway.  I subsequently worked earlier this Summer to powerwash the whole thing and put on a first coat of sealer.  That meant that it was about two years old before I put on a second coat.

Then, late in October, I found a day that was 'right' in terms of temperature (air temps in the 50's and rising for a few hours, surface temps in the 50's and no rain in the forecast).  So, I quickly grabbed the garden sprayer, filled it with sealer and slopped it on.  I used this SealBest Concrete Sealer from Menards (not the high gloss stuff) that retails for $79.99 for five gallons.  You can see it in varying degrees of absorption with a purple/white-ish hue.  And, as I mentioned above, I used a hand-pump garden sprayer with the tip about half-way throttled down and tried to saturate the concrete.  I went one square at a time and heavied up where I saw some pitting - but I'm not sure that does anything.

Going to put it on my list of things to renew next Summer - with another five gallons of sealer.   Both on the driveway and on the various stoops (like out back).

Like the chimney sweeping that I did this Summer, filing this under [House Maintenance] here.
concrete concrete sealer driveway house maintenance
Location: Downers Grove, IL, USA