Over the break, I found myself watching this Toronto Raptors/Kawhi Leonard 'Return' and Ring Ceremony video on YouTube and that lead me down a rabbit hole of 'return' video tributes.  There's a bunch of Derrick Rose coming back to Chicago clips and there are other things like this King Felix steps off the mound for the last time in Seattle video.  And there's this Mariano Rivera All-Star Game entrance video - which might be the best tribute out there.  He trots in to his "Enter Sandman" intro music and the diamond is empty.  Standing there to a full team and stadium standing ovation he takes it all in.  Pretty awesome.

But, on that journey down video lane, I also came across this video that I've embedded above showing Michael Jordan returning (for the last time) in 2003 to the United Center as a Washington Wizard.

Lots to like about this (including how they did a sweet little fake out with the "From North Carolina, at 6' 6".... Jerry Stackhouse.), but the standing ovation is worth watching.  Starts at the 4:20 mark when the G.O.A.T is introduced and runs to 7:40.  3 minutes and 20 seconds.  But feels like an eternity.

And what is great about this particular YouTube video are the comments.  I've posted about how AWFUL - like absolutely AWFUL - YouTube comments are.  Just the worst part of the internet.

But on this video?  The top comment is from just nine months ago. And what do the kids say these days?  "I feel so seen"?  That's it, right?  Welp, I feel like I've been seen with this comment from user "do heo": 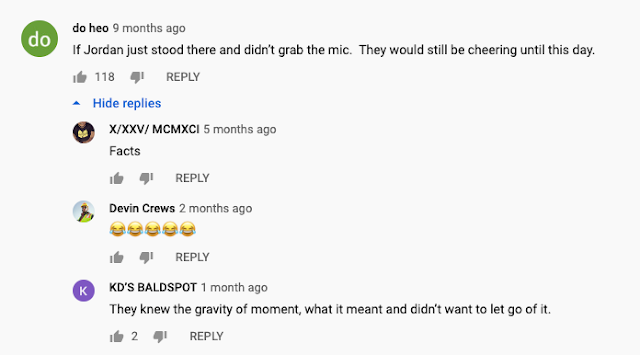