Posted by Jake Parrillo on February 11, 2020
Back in early January I picked up a new caliper measuring tool from Amazon and started to set some baselines on the trees that we've planted around our yard.  After deciding on following the "6' from the ground rule", I marked each tree with a Sharpie.  Then began to measure them.  First up were the eight Frans Fontaine European Hornbeam trees that went in near the fenceline in Spring of 2017.

I then went around and took an inventory of the nursery stock in the remaining part of our backyard.

I have done a 'height' inventory of the past few seasons, but with the tree heights growing, it has become a little bit less scientific/precise on some of the trees.

I thought that I had posted about the small front yard trees we have, but in looking back in the archives, it appears that I forgot to include a post about them.  So, here's the baseline for two of the three small trees we have out front in the [garden diary].  The multi-trunk Saucer Magnolia is hard to measure because I don't know how to do it without measuring and marking each trunk?

Here, below, are the other two front yard trees.

First up is the (troubled) Chanticleer Pear Flowering Tree.  I posted a photo of this tree last Summer as it struggled to leaf out and recover from the first hard few seasons.  And just last month, I posted some photos of the lower buds that have been set on this tree last Fall.

One size note:  back in the Winter of 2018 - just about 2 years ago - I posted about the first one of these trees (that died).  In that post, I mentioned that the tree was 'more than 3" caliper".   That was, simply a guess of sorts, but was based on what I was told by the landscape crew that installed it.  "We're putting in a 3" caliper Chanticleer Flowering Pear tree."  I think that's what I heard or remember.    But, when they replaced this tree, we might have gotten a slightly smaller tree?  Because, as of January 2020, this tree is 2.80" in caliper.  You can see that in the photo below.  I will say that I am assuming that this tree has NOT really grown since it was planted in June of 2018.  That means we're coming up on month 20 of being in the ground, but the tree has had to focus on overcoming the transplant shock and water issues due to the clay bowl below its feet. 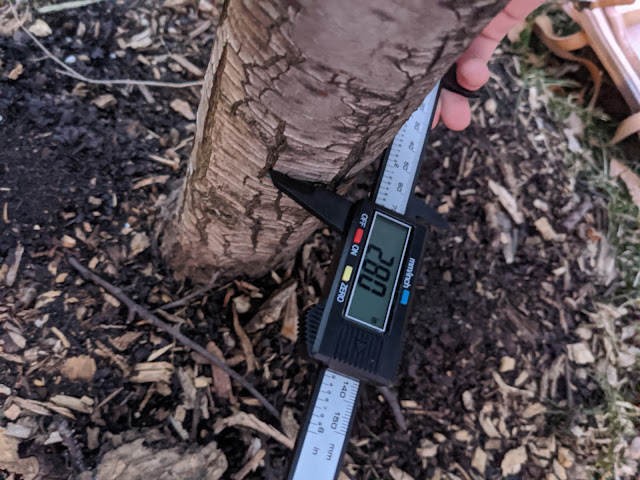 The other tree out front that I'm including in the base measurements is the small Bald Cypress.  This was bought at Home Depot for $19 in September of 2018 on a whim.  I wasn't really planning on putting one of these in the yard at that moment, but I had not come across a Bald Cypress for less than $20.  It was small.  I mean...S-M-A-L-L at the time.  And it is still small today.  The photo below shows the caliper diameter at 1.21". 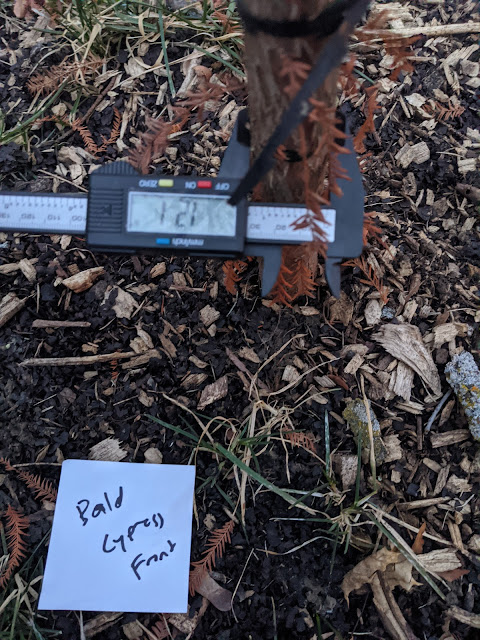 Here's the table of our front yard trees.


For comparison, the Bald Cypress would not come in as the smallest in caliper.

This Bald Cypress would be fifth smallest.

On the top of the list, this front yard Chanticleer Flowering Pear at 2.80 would be the 2nd largest - right behind Frans Fontaine Hornbeam #3.

I posted about some front yard tree plans/dreams earlier this year.  A year from now, I hope that we've added another tree (or two) to this front yard list.  And...who knows...maybe even figure out the Saucer Magnolia while I'm at it.