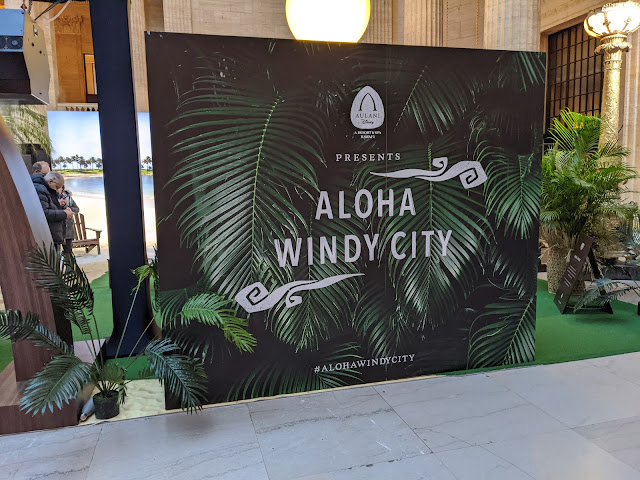 On most days, I commute to and from work through Chicago's Union Station and barely notice the station as I hustle off the train, down the platform and up/out of the station. But a few weeks ago, Nat sent me/tagged me in a friend's Instagram post while I was at the office.  At first, it didn't seem like anything out of the ordinary.  Brooke's post is embedded below and if you're following her on Instagram, it shouldn't come as a surprise that her photo features Mickey Mouse.  But, then the caption hit me and realized that she was talking about *my* train station.  She was there, on a fake beach with Mickey the Mouse.  What the What?


I dug around on the #AlohaWindyCity hashtag and found the original post from Disney's Aulani resort that announced the experience and features some Chicago-specific graphics and the call to action to 'visit the Sun' at Union Station.


We’ve arrived in the Windy City! And we’re ready for some warm weather and a day filled with legends. Follow along with the fun throughout the day @DisneyAulani #AlohaWindyCity #Hawaii
A post shared by Aulani, A Disney Resort & Spa (@disneyaulani) on Feb 19, 2020 at 6:17am PST


I left the office about ten minutes early to see if I could find and experience this Disney Aulani pop-up at the station.  I wandered into the Great Hall and over to one side was this set up with the recognizable Aulani 'A-shaped arch', some fencing and a bunch of tropical plants that you see below.  I was drawn in, of course. 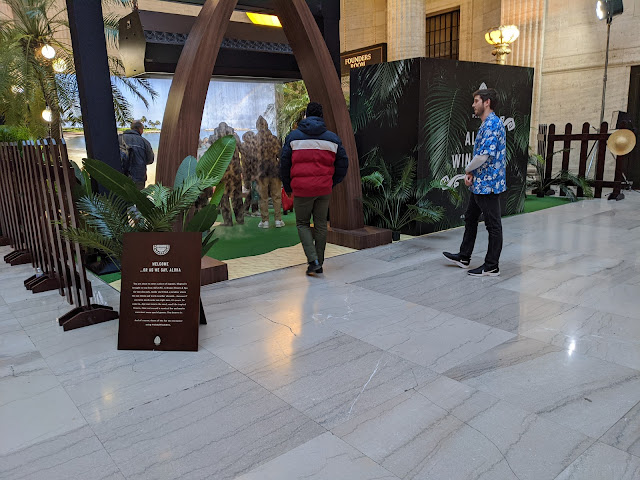 The booth (I suppose that's what I'd call it) was a REAL DEAL tropical delight in the middle of Chicago's terrible, dark and cold winter.  Now...I'll admit that I'm a bit of a Disney homer.  And an Aulani Homer.  No question:  I'm a Disney guy.  And we've been to Aulani, so I know that there's magic there.  Even though both of these factors make me an easy mark for this experience, I have to say that it was really well done and think it likely drove a lot of consideration for the resort.

Now..back to the actual experience.  There was a 'magical waterfall' which was a mist waterfall that welcomes you to the 'resort'.  Once inside, they have a photo backdrop that was a pretty realistic view of the Aulani beach, shore and the little cove that you can wade into in real life.  There was a neat faux firepit with orange 'mist' that kinda looked a bit like real fire.  And...one of the best touches:  there was a large artificial sun suspended over the booth.

By the time I arrived, they were just offering the photo backdrop for selfies and such or a photo with a couple of what I think were cast members wearing Hawaiian gear.  Earlier in the day - see Brooke's photo, you could have met Mickey Mouse himself or watched hula dancers or ukulele musicians.

I stepped in the experience and I have to say...was transformed.  Just for a moment.  We have such great memories of Aulani and our time there.  And - for the fleeting moments - my brain reconnected to those memories and put a HUGE smile on my face.

Outside the exhibit, there were staff members (they weren't wearing name tags, so guessing they weren't cast members?) encouraging visits and they had this sandwich board sign stood up that sets up the experience. 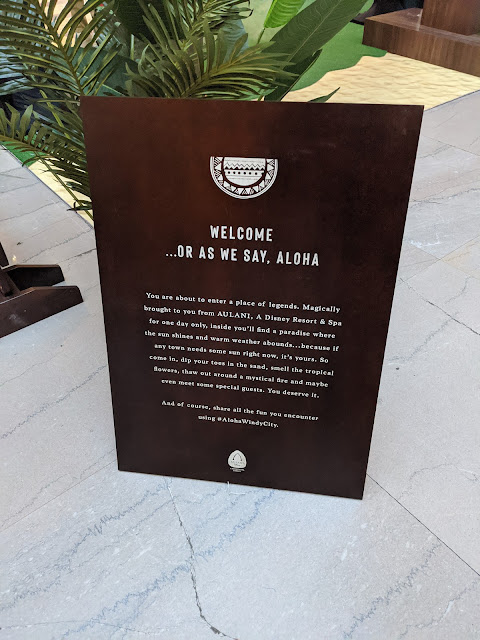 You can click the image to see a larger version of the sign.  Here's how it reads below:

You are about to enter a place of legends.  Magically, brought to you from AULANI, A Disney Resort & Spa for one day only, inside you'll find a paradise where the sun shines and the warm weather abounds...because if any town needs some sun right now, it's yours.  So, come in, dip your toes in the sand, smell the tropical flowers, thaw out around a mystical fire and maybe even meet some special guests.  You deserve it.

And of course, share all the fun you encounter using #AlohaWindyCity.

Some lovely sentiments there - and I have to wonder if Chicago was/is the only city to get this experience? Based on a quick Google search, it seems so?  Perhaps they'll go to other cities or do more days in other cities next Winter?

Here's another shot I took that shows the photo background, the palm trees and, of course, you can see a little bit of tartificialcal sun in the top right of the photo. 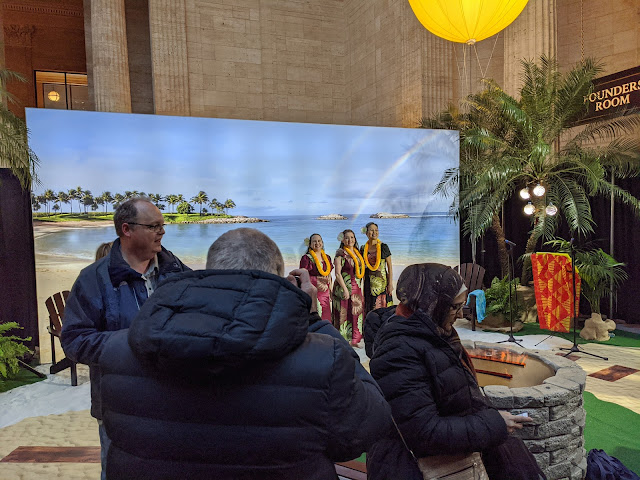 I found this video on Youtube (starting at 1:09) that walks you through the booth/pop-up and shows the hula dancing, the mist fireplace and tartificialcal sun hung from the ceiling.