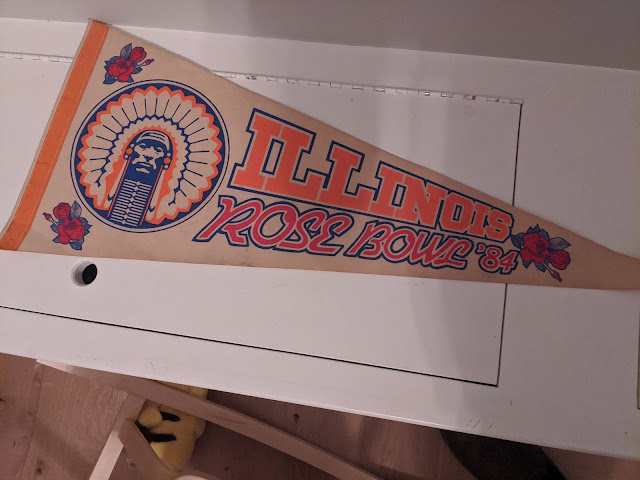 I was in the KotBT's room recently and saw that Nat had a stack of vintage felt pennants on his dresser that she was dealing with/sorting in an attempt to put some up on the walls of his room.  They ALL were pretty neat, but there are a couple from the collection that I think are worth documenting on this here blog. The first one is this one you see above - Fighting Illini Football Rose Bowl 1984.  This pennant is one of MINE - from when I was a kid.  I remember it well.  It came - along with a whole host of boxes from my childhood - from my parents when they moved out of my childhood home.  It was one of a few pennants that they (somehow??) saved.

This one is of particular interest to me - and I love that it is going in our boy's room.  I had a sister that was a number of years older than me.  And one of my earliest memories is of visiting her down at the Six Pack in Champaign during her freshman year.  I would have been four or five years old when she was there.  And this was during her Freshman year.  She enrolled at the University of Illinois in the Fall of 1983.  Imagine that:  your first year being a fan and...WOWSA!  Your school goes to the Rose Bowl.  The "Granddaddy of them all'.  My head would explode thinking:  'here we go!  Rose Bowl every year, baby!'.

Unfortunately, they've only been back once since then (2007 Season, so January 1, 2008).  But, this pennant reminds me of another time.  That 'time' was when the Chief circle logo was part of the athletic department.  Say whatever you want - and I'm not here to say one way or the other on the merits of Chief Illiniwek - but that logo?  It was perfection.

Add in the roses on the three points?  Perfect.  The fact that this has taken on (I assume it was white originally) a cream color is lovely.

I think that Nat is sorting on how to hang these in his room.  But, I'm sure that if you're around my age, you had pennants like this when you were a kid.  And how did you hang them?  Thumbtacks of course.  This one has the holes in the orange border to show how it was hung.  But, today?  I think she's thinking of some of those 3M quick-release hangers/tape is a better solve than thumbtacks.