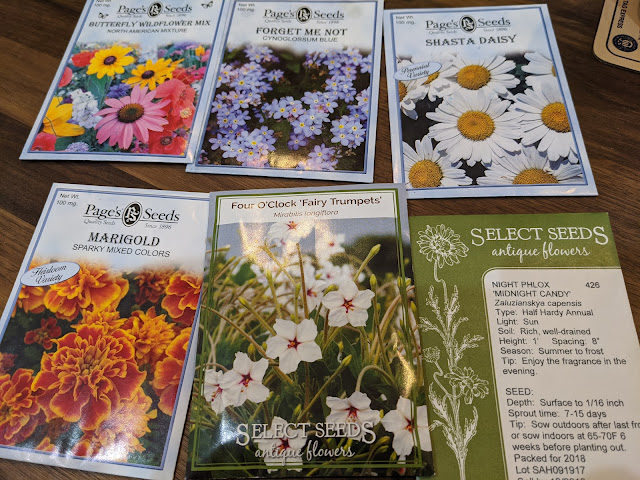 From their Grammy, the kids received these six packages of flower seeds as part of the effort to keep the kids occupied while being home during their social distancing period.  I showed recently that some of the Cut and Come Again Zinnias had germinated and mentioned that we didn't plant all the cells with Zinnias.

That's where these seeds come in:  the kids are choosing from these six varieties to plant the balance of their little greenhouses.

The six seed sets they are choosing from include:

The one that I'm most drawn to are the Four O'Clock 'Fairy Trumpets' from Select Seeds.  From their product page, they talk about the historical significance of this annual - they list them 'Circa 1812' and talk about how Thomas Jefferson was involved:


Jefferson received this seed from its native southwest and grew it at Monticello—perhaps he was as captivated by it as we are. Outrageous curvy pink stamens dotted at the tips with orange pollen reach out a good 2" from the magenta throated white trumpets. A sweet orange blossom scent draws nighttime visitors, human and invertebrate alike! Grow in moonlit gardens or in pots placed on the patio. Stake in more fertile soils to underpin its relaxed bushy growth.

The folks at Select Seeds peg the Night Phlox 'Midnight Candy' seeds to 'circa 1870', but that seed packet really buries the lede:  look at the beautiful, interesting flowers they throw off.

Each of the three kids have decided to sow different seeds.  I'm hoping that we'll get enough to plant some clusters in the yard come May.
flowers flowers from seeds garden diary heirloom seeds indoor gardening seeds seeds sown