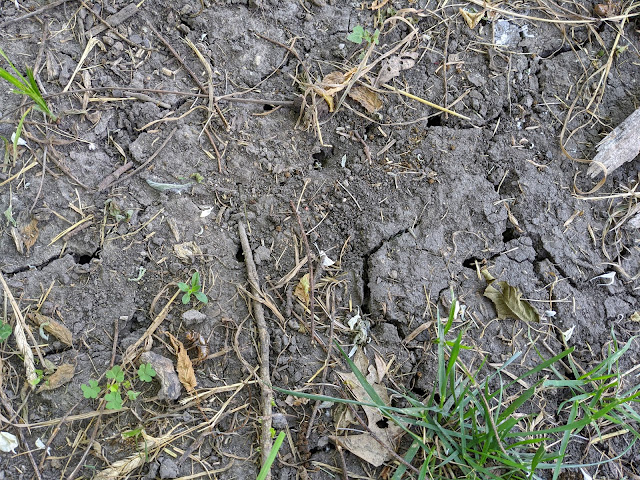 Back in the rear part of our property - where the soil was undisturbed during our construction, the ground is littered with these little holes - which I think are Cicada holes.  Why?  Because they're everywhere in our neighborhood.  This appears to be part of the 17-year cicadas that are in Northern Illinois.  From the University of Illinois Extension office, they label these cicadas - in 2020 - as the "Northern Illinois Sub-Brood (part of Marlatt's XIII)".

Note the inclusion of "sub-brood" in their name.  Turns out, the ones that are coming in 2024 - also on a 17-year cycle - are going to be more significant than this Summer.  Again...from the University of Illinois Extension office:


The northern Illinois brood, which will emerge in late May 2024, has a reputation for the largest emergence of cicadas known anywhere. This is due to the size of the emergence and the research and subsequent reporting over the years by entomologists Monte Lloyd and Henry Dybas at the Field Museum in Chicago. During the 1956 emergence, they counted an average of 311 nymphal emergence holes per square yard of ground in a forested floodplain near Chicago. This translates to 1½ million cicadas per acre. In upland sites, they recorded 27 emergence holes per square yard, translating to about 133,000 per acre. This number is more typical of emergence numbers but is still a tremendous number of insects. For comparison, a city block contains about 3½ acres. When the cicadas start dying and dropping from the trees later in the spring, there are large numbers on the ground, and the odor from their rotting bodies is noticeable. In 1990, there were reports from people in Chicago having to use snow shovels to clear their sidewalks of the dead cicadas.

I remember one cicada emergence from my childhood - so I'm guessing it was the 1990.  It seems that they came around in 2007, but I was too caught up in my own little bubble - and...being in L-O-V-E with Nat - to notice the cicadas/care about them, I guess?  Because, it didn't leave much of a mark on me.

What is interesting about our current property is that these holes are mostly on the back part of our lot - where we didn't excavate.  Wikipedia says that: "Cicadas live underground as nymphs for most of their lives at depths down to about 2.5 m (8 ft)."  So, perhaps when we excavated and graded the property, the closer-to-our-house nymphs were removed or smothered?

Oh...and what will it mean for our ecosystem?  Cicadas are edible.  Again...from U of I extension, they talk about humans eating them:


Periodical cicadas are also edible. Native Americans utilized them in their diet. In 1990, several college students were filmed eating them alive. When asked what they tasted like, the students reported that they tasted like almonds. Drying them in a microwave oven carefully causes them to release an almond smell.

I'm going to pass on trying them.  But, I'm more interested in understand what critters are going to feast this Summer.  The Tribune talks about who eats them in this piece from 2003, but I'm thinking it is going to be bacchanalia for skunks.   I mean....they're going to be fat and happy and go nuts.  Does that mean we'll see a bump in skunk population in the coming years?  If so, you know I'll be buying a domain name and getting my Skunk Map back up - but in a new town.
backyard bugs cicadas downersgrovestinks elmhurststinks.com garden diary u of i extension office web projects
Location: Downers Grove, IL, USA