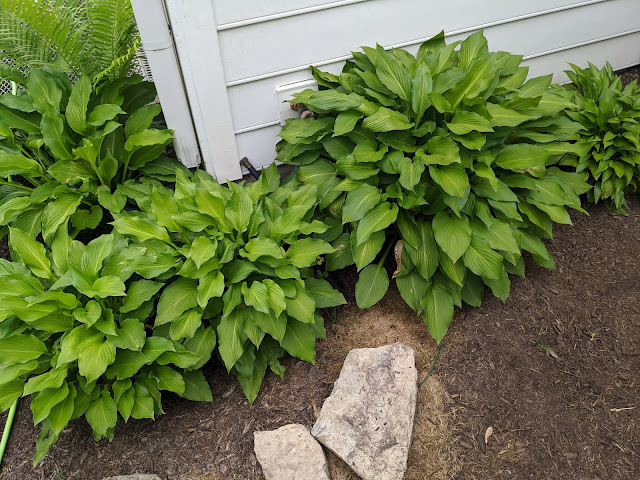 Yesterday, I posted a photo of a miniature hosta that I transplanted from the far back part of our yard to underneath the Oak tree swing trunk and mentioned that I was watching it to see if it was healthy enough to divide into multiple plants.  While I wait for that....I wanted to post about a few other hostas that were certainly *healthy enough* to divide.  You see them above in the photo.  These are all "teardown hostas" that I grabbed in the Fall of 2017 and was surprised in 2018 when they all emerged.  Hostas, are indeed, hearty perennials.

This post shows the location in question and the landscape plan that was drafted:  it includes 4 Hadspen Hostas that wrap around the corner of our house.  If you look at the photo at the top of this post, you'll count five (5) hostas.  And...in the middle of that photo, you can see one of them is bigger than the rest.

I'm thinking my plan is to dig out the two 'middle ones'.  That would be the largest one and the one to the LEFT of the largest one.   I'll take the large one and divide it into four plants and relocate those.  (more on that in a minute).  Then take the other one that is dug up and move it to the right a bit to provide some spacing for the four plants.

Here's another look (below) at that big one that I'm thinking I can split up into four different plants. 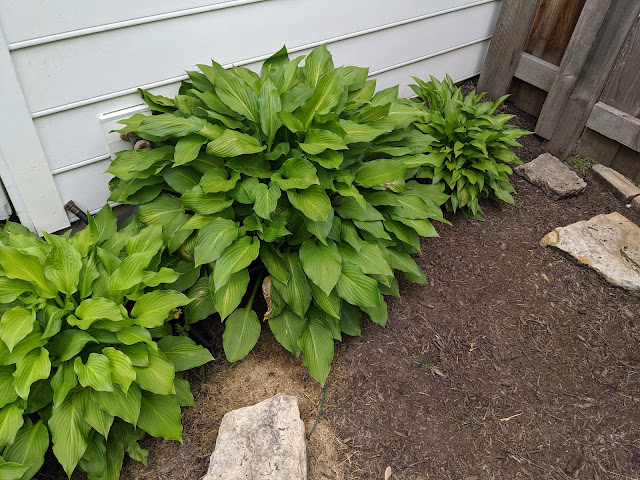 There are a few spots that I can put the four plants:

1.  Front yard bed - *behind* the existing hostas there (layered on top of the tulip bulbs).   I can see three or four plants there.
2.  Underneath the Oak Tree - around/near the mini one mentioned above.  What I had been calling Priority Area #2.
3.  Right on the corner of the screened porch.  The plan calls for a pair of hostas there.
4.  Priority Area #3 - which calls for some hostas, but due to the Yew Hedge that I planted would require a slight audible.

Just going for those 4 areas, I count:

Dividing up this ONE plant won't yield 20, but it will get me started.  Perhaps, I should be looking at the garden center for deals on hostas in the coming weeks.
#hornbeamhill #newoldbackyard backyard dividing plants garden diary Hostas landscape plan moving plants shade gardening teardown hostas
Location: Downers Grove, IL, USA