Posted by Jake Parrillo on July 22, 2020
When we first went to the Magic Kingdom when the Babe was very young, I remember being struck by these twinkling lights that they had in the park.  At one point, they had a bunch of trees in the 'hub' - that have all been removed so people can view the castle/projection show.  On *those* trees were these twinkling lights that they turned on at dusk.

I can't find a video of *those* lights, but I do have this one of what I think are the same lights up at Downtown Disney.


Those lights give off a little bit of a firefly vibe and are what I remember.

And, it isn't just *me* who remembers the lights, as if you put in the phrase [twinkle lights disney trees], you'll see dozens of forum posts all about buying or replicating those lights.

I've spent the past few months wading through them and I think I've come up with an approach that I'm going to attempt to DIY here at home.

First, the bulbs and the fixtures.

Again...based on wading through the various forums, it appeared to me that the bulbs are what are known as "258 flashers".   So, I went looking and asked some questions.  I found this listing on ReplacementLightBulbs for 258 flashers.  They're asking a buck a piece.

They list them as being 14 volts and "for 12V applications".  Wattage of 4 Watts.  And having an E10 Miniature screw base.    All of that information is both relevant...and interesting.

First, the fact that they're for 12 volt applications makes sense.  I would think that Disney would want a low-voltage situation in these trees as they'd be close to guests and that would be safer.  Second, the fact that the bulbs use an E10 miniature screw base had me scratching my head.

The easy answer here would be to go find a "string" that fit E10 miniature bulbs, right?  But, as far as I can tell, something like that doesn't exist. 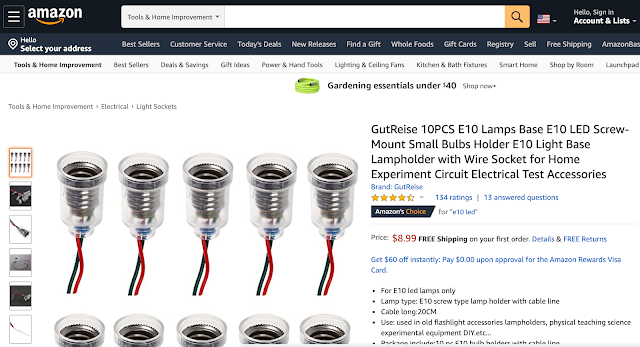 So, between those two things - the bulbs and the bases - I'm thinking that I have a potential path towards recreating the twinkle lights at Disney's Magic Kingdom.

What else is there to figure out?  A power source - 12 volt.  How and with what to wire them together.  And...connections - for outdoors.

The power source seems easy:  using a landscape lighting transformer that is 12V.  The wire?  Same thing...landscape wire that is black.  The connections? Welp, I'll have to look around.

For now, I'm going to order the bulbs and bases and find a way to test them out to see if the flashing of the bulbs is what I'm going for and if it reminds me of Disney's twinkle or firefly lights.  If it does, then I can spring for the transformer and wire the whole thing up.

More to come as I progress on the project.