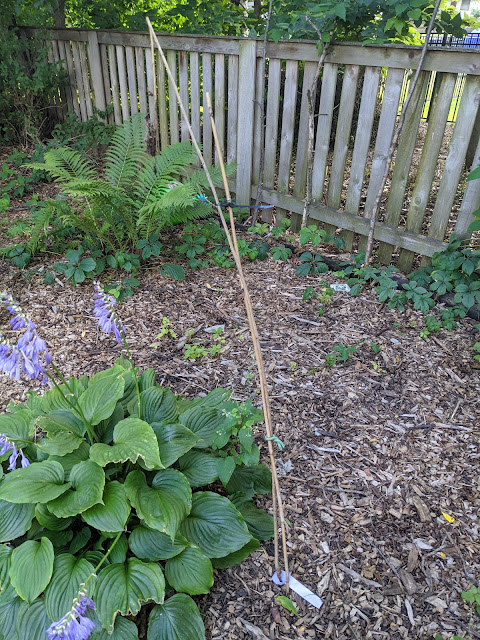 That thin tree, braced with a piece of bamboo was an inexpensive Lombardy Poplar tree that I planted this Spring.  Put in the ground in May, it immediately suffered some shock.  And, while it temporarily seemed to recover with some new green growth, it is now a lost tree.

This is the first tree that I'm marking down as 'lost' for this growing season.  At least, officially.  And...at least...with the caveat of: 'so far'.  I have three other larger trees on the 'watch list' - that didn't break dormancy this Spring.  And two of the five remaining tiny Canadian Hemlocks that have been ravaged by rabbits.   Of those five trees, ALL of them have *some* green growth on them.  But, on a few of them, it isn't very much.   Thus, they're not on the official "lost" list, but might be this year or next.

As for the official list, this Lombardy Poplar tree joins some others in the tree graveyard on Hornbeam Hill.  This is the 9th tree that has died on our property that we planted.  Two have been replaced.