Posted by Jake Parrillo on July 08, 2020
Back in April, I posted some photos of a handful of trees that appeared - at the time - to be late in terms of coming out of dormancy for the year.  They were a Chanticleer Pear tree that was planted on Earth Day 2018.  A small Red Valley Sun Maple planted the same day.  And a Crimson King Maple that I planted in 2017.  Something weird is happening with two of them.  And it is now happening with another tree.

First, the bad news.  The Crimson King Maple appears to be lost.  I'll post about it separately.

But, let's look at the other three.  Here, below, is the Red Valley Sun Maple.  The top of the tree never broke bud.  And the limbs became dry and brittle.  But, this Summer, this growth shot out from the base of the trunk.    If the tree was healthy, I'd call these things "suckers". 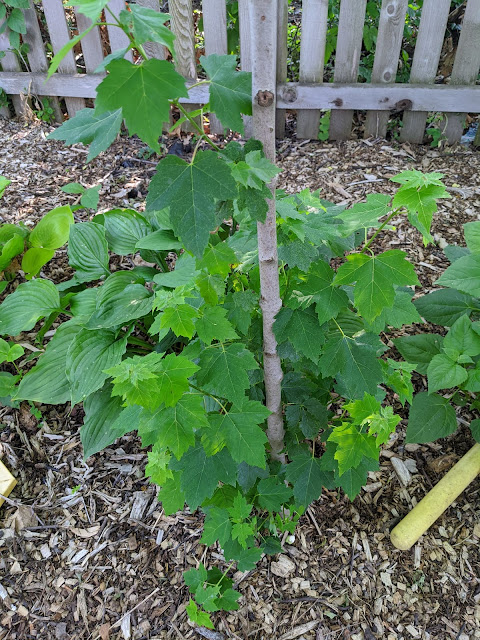 Suckers are a tree’s attempt to grow more branches, often in response to some kind of injury. If the roots have been damaged, suckers may grow from the base of the trunk. If suckers grow higher on the trunk, they’re called watersprouts and they are usually at the site of a pruning wound, a crack or some other damage.

Same thing with the Chanticleer Pear - on the southside of our property.  (Below)It never broke bud, and didn't flower of leaf-out.  But, now there is some growth coming out of the base of the trunk - from about eight inches off the ground. 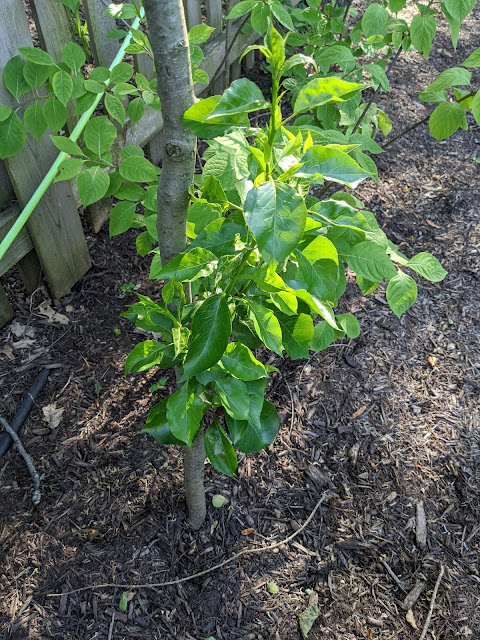 And there is one more new entrant to this game:  The tree-form Dappled Willow.  Planted last year, it sprang to life early this Spring.  Here's a post from April that shows the first few leaves emerging from the buds.  It was ON.ITS.WAY this year.  And then something happened.  It died.  But, there is some new growth that is now coming out from the base of the trunk.  Weird, right? 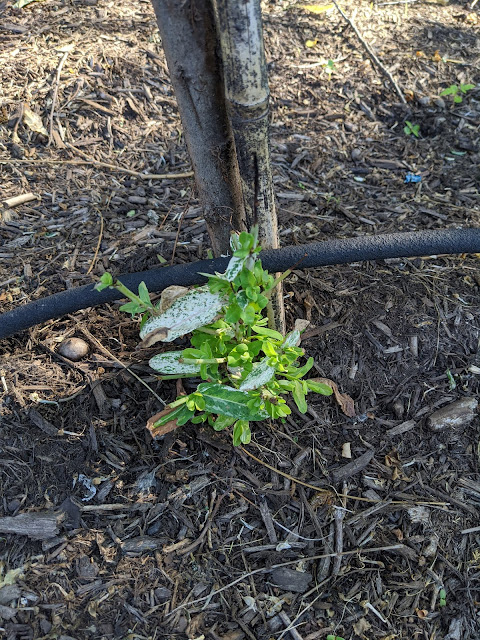 Now...all of these trees are nursery stock from big box stores.  They may (???) be grafted trees - especially the Dappled Willow, but I took a look at the place where this new growth is emerging and it sure doesn't seem like there's any graft line/mark above/below where this is coming from.  So, what the heck does it mean?  And what do I do?

For now, I've left the trees intact - and think that I'll probably leave them as they are through next Spring to see what the trees do.  Will the tops come back?  I'm doubtful on that, but who knows?  Some of the limbs are showing the tiny-ist bit of green and aren't totally brittle.

If they don't come back next year, but this new, lower growth does...what do I do then?  Lop the top of the tree off - above where this new growth is and basically think that we've got a tiny, one-foot-gall (or so) tree that will hopefully/eventually grow up to something?  I'll keep an eye on all three of these - and the Crimson King - and post to the garden diary what happens next.