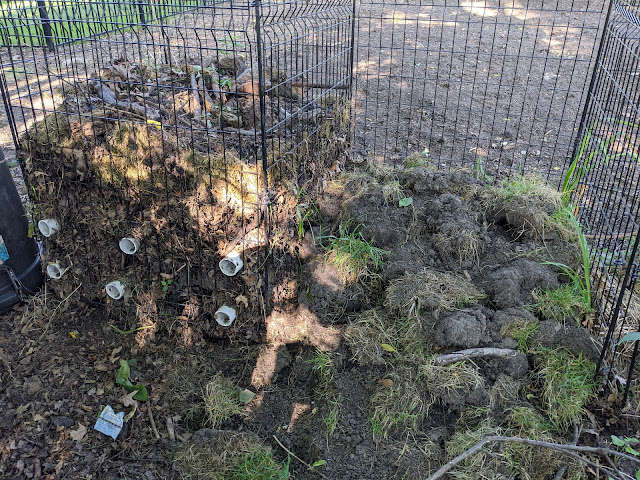 Sixty days or so ago, I posted some photos of our three-bin compost setup that I have back on the easement behind our property.  If you go look at the bins in Mid-May, you'll see that the 'active' bin on the left is just about filled to the top.  Earlier this Spring, I added passive aeration and then made a mix of browns/greens that I had on hand.  Today, the photo at the top shows the bins in their current state.  The active bin has compacted significantly.  And the nitrogen/green bin (in the middle) has some clumps of turf and topsoil in it.

A couple of things of note.  First, about the time of that photo in Mid-May, I added some compost starter to the pile.  And, I took a couple of bags of grass clippings off the backyard and threw them on top and mixed them in with my pitchfork in an attempt to get the ratio right for high heat.

Here, below, is a head-on photo of my active bin.  You can see some of the grass clippings in the front on top and there are a few pieces of wood on top to weigh things down.  Note:  most of the bin is just two (2) sections of fencing up from the aeration pipes that bisect a fence section. 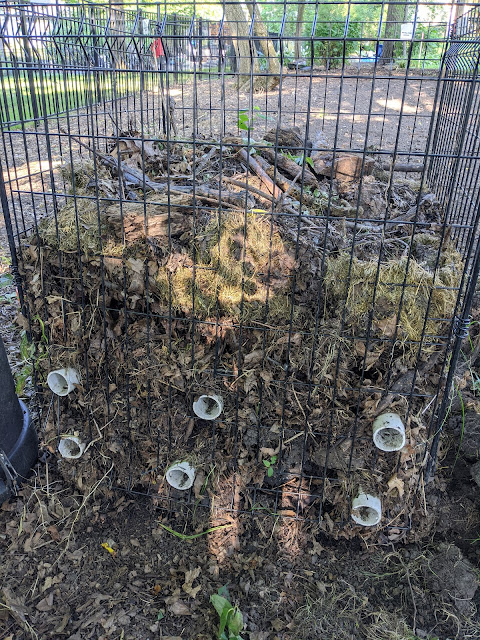 Back in May it was five-and-a-half (5.5) sections higher than the aeration pipes.  So, we're seeing quite a bit of compost pile shrinkage.  Which is a good thing.  Via PlanetNatural:


As composting materials break down, the pile shrinks. Some of this shrinkage occurs simply because contents settle and compact under their own weight. But as the composting process cuts materials into smaller and smaller bits, they pack against each other more and more efficiently, taking up less and less room. In general, a finished pile is only a quarter to a third the size of the original pile.

This pile can use some turning, so on my list of items to get to in the coming days is to bring the fork back there along with the garden cart and unpile the top bit of this pile.  Then re-pile it back in and up.

There's one other thing to note in the photos:  look *behind* the compost bin.  It is all cleared out.   That's a mystery wrapped in an enigma.
backyard compost compost bins compost gardening easement garden diary
Location: Downers Grove, IL, USA