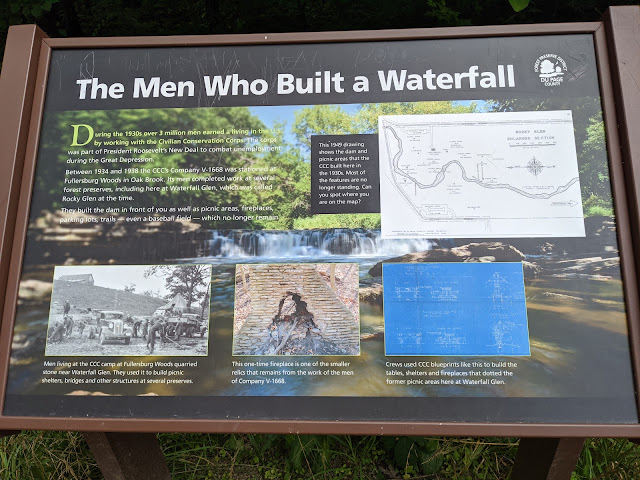 A few days ago, I posted about seeing an Indigo Bunting male bird in a splendid blue coat down at Waterfall Glen.  During the COVID-19 pandemic, we've tried to find time to get down to Waterfall Glen to go walking with the kids as well as dodging the crowds.  When we first went down there, they had the waterfall itself blocked off - in an attempt to keep from crowds gathering.  That was as recent as back in June.

There's now a category tag for [Waterfall Glen] here on the blog that hosts all the posts.

The photo at the top of this post is now the second post featuring a Waterfall Glen sign.  One on of our previous walks, I came across this Oak Tree identification sign and posted about it in June, too.

This sign talks about the waterfall and the "men who built it" and mentions that between 1934 and 1938, a company of men from the Civilian Conservation Corps - as part of the New Deal - were stationed up in Hinsdale at Fullersburg Woods.  It was those guys who worked at Rocky Glen (Now named Waterfall Glen) and built the waterfall.

That little nugget on this sign sent me down a reading rabbit hole.  Found out that the name of the place "Waterfall Glen" isn't named for the actual falls that the CCC men built.  Nope.  It was named after a dude named Waterfall.  For real.


In 1925, the Forest Preserve District purchased its first 75 acres at Waterfall Glen, the Signal Hill and Rocky Glen areas. Rocky Glen soon became the site of the preserve’s well-known tiered falls, which the Civilian Conservation Corps built in the 1930s. In 1973, the preserve got its single largest addition — more than 2,200 acres of surplus land from the U.S. Bureau of Outdoor Recreation. That same year, the District named the site Waterfall Glen Forest Preserve, not after the familiar falls but in honor of Seymour “Bud” Waterfall, an early president of the District’s Board of Commissioners.