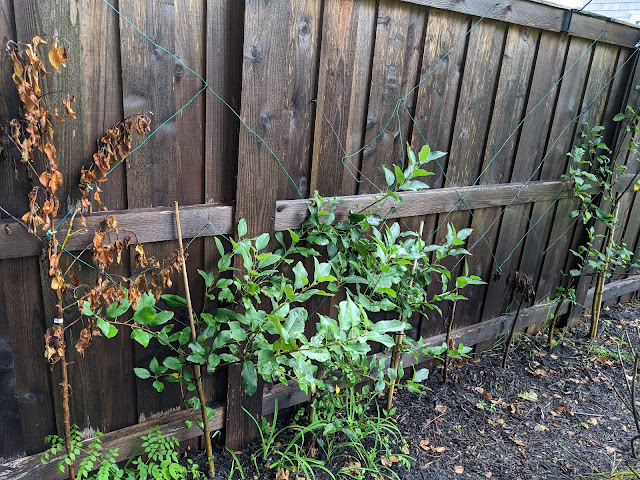 Back in May, I bought and planted eight small Apple trees - three Golden Delicious and five Honeycrisp - along the fenceline in an attempt to make another espalier.  Later, in June and July, I applied the espalier wire in the pattern of a Belgian Fence and started to wire some of them up.

This is a six week update from the last time we touched base.  And, unfortunately, it seems that we've lost three of the eight trees.  The one on the far left (#8)- which I didn't prune.  And two more (#3 and #4).  That's one Golden Delicious (#8) and two Honeycrisp (#3, #4).  Here, below is a close-up of the two in the middle that seemeed to have died.  They both were hard pruned and showed some new foliage, but they then exhausted themselves and seemingly perished. 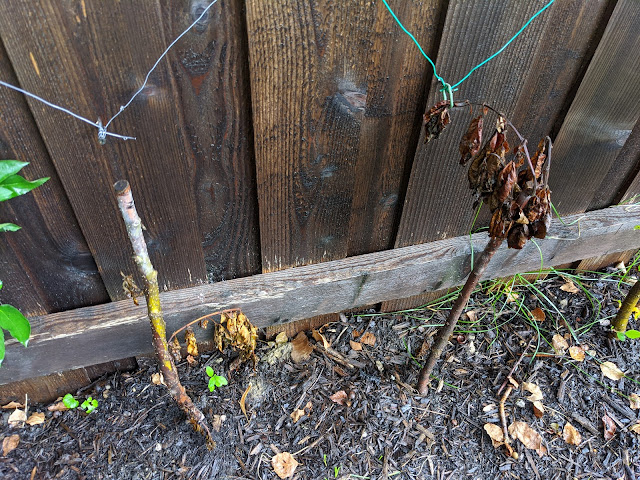 I'm *not* calling these LOST yet, but I'm thinking that before Fall comes, I will add them to that LOST column for trees.

If the big box stores carry fruit trees this month for Fall Planting, I'm thinking I should grab three and replace these to get the growth going.  If I'm able to find these, I'll likely hold off on hard-pruning them until Spring.
backyard backyard trees Belgian Fence espalier fruit trees garden diary trees
Location: Downers Grove, IL, USA