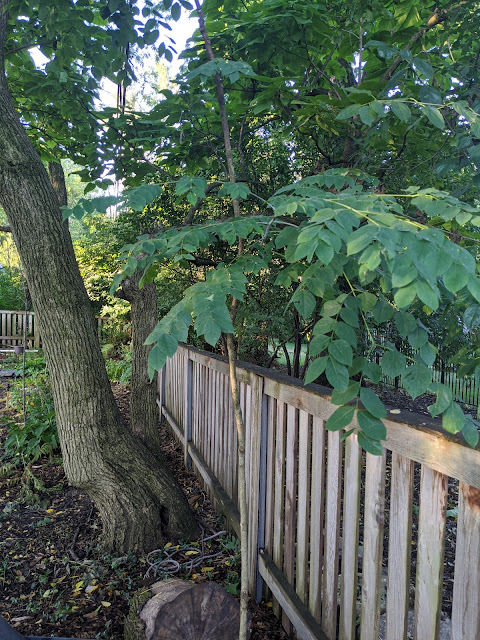 Yesterday, I mentioned that we had an arborist come over to our house to assess and help us build a plan for a couple of our trees.  While he was there, I asked him about a couple of trees that we have growing in our yard that I was uncertain of the cultivar.  I have had a few trees that I was trying to figure out before, but I've mostly sorted the Walnut/Tree of Heaven/Sumac situation.  But, I had two *other* trees that I didn't seem to fall into any of those categories, but were growing in weird ways.

I've left them up for the past few years, but not because I liked the trees, but because I just couldn't figure out what they were.

I asked the arborist if he could identify them and it took a second for him to tell me:  they are Kentucky Coffeetrees (or Kentucky Coffee Trees, if you'd like).  Turns out, I have (at least) three of them in our yard.  They're all small, but in spots that they can live and grow without much thought.

In the photo at the top, you can see one of them - along the far west side of our property line.

So, when you want to learn about the Kentucky Coffeetree, where do you turn?

To the University of Kentucky College of Agriculture, of course.


Kentucky coffeetree is a unique tree with large, woody pods and very large leaves made up of smaller leaflets. Its common name refers to the use of the pods by early settlers as a coffee substitute. With its bold form, contorted branching, unique bark and decorative clusters of large pods rattling in the wind, Kentucky coffeetree is an exceptional winter ornamental. Leaves emerge in late spring a striking pink-bronze color. As the beautiful, large airy leaves mature they become dark bluish-green above. The light, airy shade (semi-shade) of this tree makes gardening under it possible. This tree's yellow fall color contrasts nicely with the clusters of dark, maturing pods.

This urban-tolerant tree is adaptable to a wide range of soils and climates, and will survive in dry, compacted or alkaline soil. The Kentucky coffeetree prefers full sun and moist, rich soils. It should be pruned in winter or early spring. Kentucky coffeetree has no serious disease or insect problems. Litter can be a problem in spring when pods fall, and in autumn when the large leaves drop.

Survives in dry soil.  No disease or pest problems.  Cool.

But, is 'contorted'?!?  For real.  That's kinda awesome.  So, that thing on my 2020 to-do list of planting a contorted tree? I did that with the Harry Lauder's Walkingstick Tree.  But, now I have more contorted trees - without knowing it.

Below are the leaves of this tree: 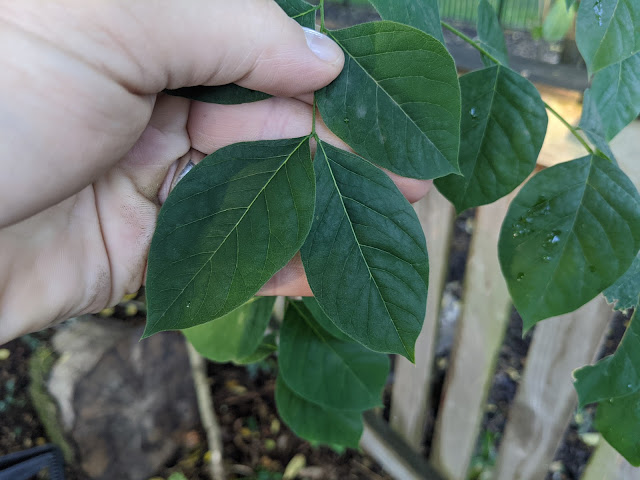 There's an interesting story about the Kentucky Coffee Tree that I found on "In Defense of Plants" that talks about how these trees are, ummm, rare.


To see a Kentucky coffee tree (Gymnocladus dioicus) in the wild is a rare event. Each year your chances of doing so are diminishing. This interesting and beautiful legume is quite rare, growing in small scattered populations throughout eastern and Midwestern North America. Presettlement records hint that its rarity in nature is not necessarily a recent phenomenon either. It seems that, at least since humans have been paying attention, this tree has always been scarce.

Matt, who writes In Defense of Plants, knows his stuff.   In that same Kentucky Coffee Tree post, he introduced me to the concept of "megafaunal dispersal syndrome".  From that post:


Essentially it posits that North America was once home to a bewildering array of large mammals that flourished leading up to the end of the Pleistocene. With that many large animals haunting this once wild continent, many have suggested that North American vegetation evolved to cope with and even exploit their presence. Certainly we see this happen on a smaller scale with things like birds and small mammals. We see it on a much larger scale with animals like elephants and rhinos in Africa and Asia. Could it be that when the Pleistocene megafuna went extinct in North America, the plant species they dispersed suffered a huge ecological blow?

The limited range of species like the Kentucky coffee tree would certainly seem to suggest so. Though it is a hard theory to test, the fruits of this tree seem adapted to something much more specific than running water. The large pod, the sweet pulp, and the hard seeds would suggest that the Kentucky coffee tree requires a larger mammalian herbivore to eat, scarify, and pass its seeds. No animal native to this continent today does the trick effectively. Most animals avoid the seeds entirely, which is likely due to their toxicity.

Welp, now I've learned something new.  Interesting concept to consider - and wonder how the trees that I have on site were germinated here.  They're small trees, so they either grew naturally or, as the arborist suggested - someone planted them.   He mentioned that - from time to time - folks like ComEd offer 'free' bare root trees that are tiny.  Perhaps someone picked up some of them?  Or, the trees were from a larger, mature tree in an adjacent yard?  The Village of Downers Grove runs a 'native tree sale' every year - and one of the trees listed is the Kentucky Coffee Tree.

From the Downers Grove order form:


While it may look like the ugly duckling of trees when it is small, the Kentucky Coffee Tree turns into a beautiful swan as it matures. It has the largest bipinnate leaves in northern Illinois, and these large leaves need large branches for support. A 2-inch caliper tree has only 1 to 3 branches. Females produce 3-6 inch seed pods that stay on all winter providing great winter interest. The plants are dioecious (separate male and female trees) so they may not flower.

That 'ugly duckling' status is what, I'm thinking, had me wondering if it was a weed tree and should be removed.  Glad I didn't act too careless and kept them around.  I'll document the other ones in future posts and will try to add them to the tree caliper inventory measurements later this Summer.
arboretum arborist backyard contorted trees garden diary kentucky coffee tree native trees tree inventory trees
Location: Downers Grove, IL, USA