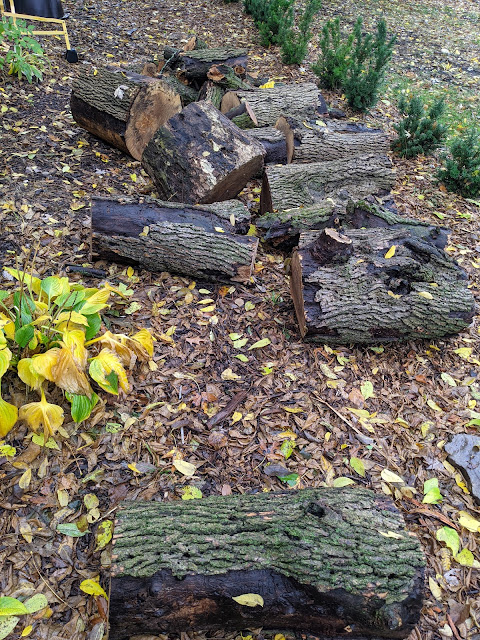 A week or so ago, it was warm enough to have our windows opened.  And as is the way these days, I was working from home in my office.  We have construction going on next door to us, so it isn't that weird to have heavy equipment running and noises coming from various forms of trades and construction.  But, what I *thought* heard wasn't construction equipment, but what sounded like chainsaws.

My firewood hoarding antenna shot up.  And I went out to see what was doing.

Sure enough, there was a crew of guys taking a couple of trees down in the yard behind us (and one to the south).  I walked over there and asked them what they were doing with the wood.  And what kind it was.  They said it was a mix of Ash and Pine.  They said that I could have the Ash.

So, over the next twenty minutes or so, the guys proceeded to bring the rounds and drop them over our fence into the far part of our backyard.  You can see what I received in the photo above.  This tree is really chewed through as the Emerald Ash Borer destroyed it.

You might recall that in early December of last year, I received a bunch of Ash rounds - just like these.  From our neighbor's house next door.  I proceeded to find some of the nicer days during the Winter to get out with my axe and split most of this wood and put it up to season.  There are also a few larger rounds that I think Nat might like to use as seats around our fire pit out back.