I own exactly one camouflage item of clothing.  It is this Doug Hayse for Illinois State Representative camo ball cap.  Based on the data on the Illinois Department of Elections site, it appears that this hat is from the 2004 general election cycle.  That means that I've kept this hat for more than 15 years.  But, I only wear it one day a year:  Christmas Tree Farm Day. 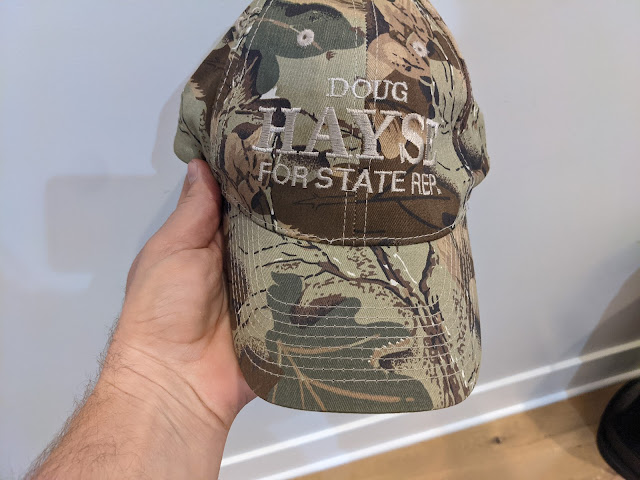 Just filing this away as one of my Christmas traditions - I've successfully been able to file this hat away in with the rest of our holiday decorations.  Just to be pulled out when the tubs of decorations come out each Thanksgiving-time.

I'm pretty sure it started because we had (historically) went down to the Tammen Treeberry Farm in Braidwood.  That was in, or pretty darn close - to the district Doug Hayse was running in for State Representative.

If I was doing - (which...NOTE TO SELF: I should do one this year, right??) - one of the "my favorite Christmas things" from this year, this hat would be on there.