Along with the fern and wire vine, we had a dwarf umbrella plant (schefflera) that had been languishing upstairs in our guest bedroom for the better part of the past six months.  It was stuck and growing at an odd angle, was very top-heavy and had a very tall, thin and bare trunk.  We have another one of these plants that I've been tending to over the past year or so with top-cuts to encourage it to grow out more bush-y.  It has responded to each of those pruning exercises.

So, I thought that if I repotted the troubled plant to straighten it out and give it a little top-prune, we might have something.  And, so far - about a week in - it seems to be ok.

Here's how it looks now - on our mantle: 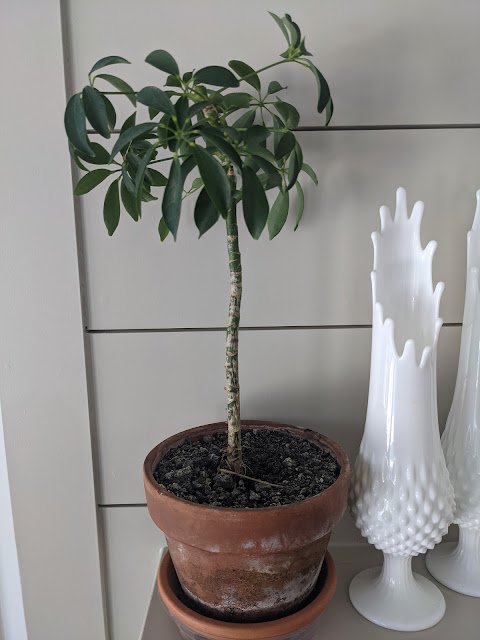 It is now standing up straight (instead of off at an odd angle) and I cut the leader/apical meristem off about half-an-inch from where the die-back settles.  I'm hoping that we'll see even more growth coming out of this thing starting with the current crown and down the trunk.

I also wonder if I put some bonsai wire to the trunk, could we get it to twist/bend a little bit to make it even more interesting?  Hmmm...something I suppose I should try, right?