My sister Vic sent me this photo of us at Walt Disney World from when we were very young.  It is my Mom (very stylish, right?), my second oldest sister Sharon, my sister Vic and - of course - myself.  I'm assuming my oldest sister is the one taking the photo, right?  We're all wearing Mickey Ears and my mom is holding a fourth pair in the photo.  But, where are we?  It seems like we are (obviously) in a hat shop, but looking at the cast member's uniform, I wonder if there's a way to figure out the location.  Is this inside The Chapeau in the Magic Kingdom - the big hat shop?  Or, are those lederhosen that the Cast Member is wearing?  Could this be inside the Germany Pavillion at Epcot? 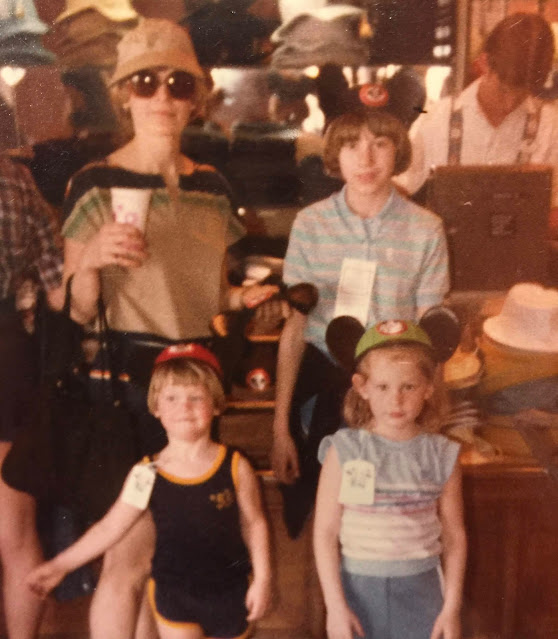 I'm thinking that I'm four or five years old in the photo.  That would make the math line up for early 1983.

It seems like I'm going to have to poke around on the Web to see if I can identify that cast uniform to figure out WHERE this photo is taken.   Also, what's the story with the little tags tied to our clothes?  Lost children tags?