Earlier this month, the fine folks at Disney Imagineering shared even more details of the newly refreshed entrance to Epcot that includes the original fountain, some cool ribbon lighting and a series of flagpoles that are flying flags featuring the original symbols of Epcot.  Seems like it is a lot of "back to the beginnings" for Epcot in terms of the entrance and I'm here for it.

In our pin trading, we've collected a series of the Epcot pavilion symbol pins, but there's one that we just came across that was new to us.  It is what you see below: 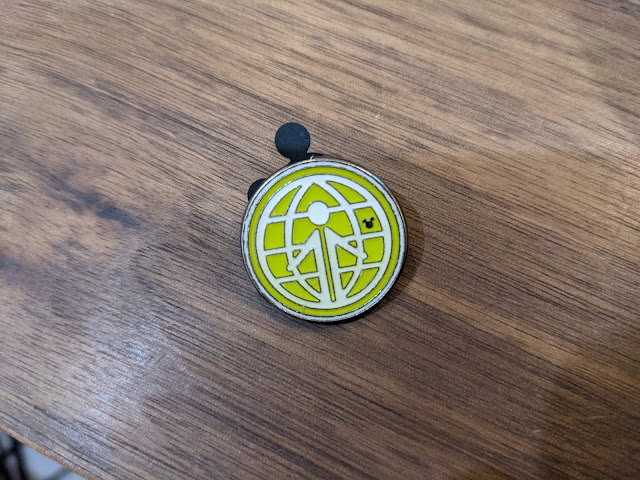 Now, we can certainly have a conversation about *if* this is scrapper (and it might be), but that's not what I'm here to post about.  It is about the fact that, based on THIS pin, I just learned that the World Showcase had/has a symbol that was in harmony with all the other ones that I was familiar with over the years.  What is interesting is that this story on D23 (the official fan club for Disney) doesn't include the World Showcase symbol among the other ones like The Seas, Imagination, The Land, Horizons and Universe of Energy among others.

But, that's what the guys at PinPics are saying about this pin:  it was released in 2018 and represents the World Showcase.  I'll stick it on the board next to some of the others, but maybe this will now spark a deliberate attempt at trading for even more of these Epcot pavillion symbol pins that (I'm pretty sure) the kids aren't that interested in and use as "traders".