Last Spring, our neighbors to the north began framing their house and once the window placements were set, I came to the realization that our row of Frans Fontaine Hornbeam trees were doing a pretty great job of screening between our houses.  But, there was an edge spot - closer to the front of the house - that was going to be exposed to one of their new windows.  So, on Earth Day 2020, we decided to plant a columnar flowering pear tree (yeah...I know.  they're not great trees.  But, I needed to put in something that was inexpensive, narrow in habit and, ummm, fast growing.  The Chanticleer Pear tree fit the bill.

When I planted it, the tip top of the tree was right at the fence level.  But, by the time Fall came around, it had put on more than 18" to the top.  Have a peek at it in October of last year.   The tree was beginning to do its job.

And, finally, let's add the tree in THIS post to the total.  There's good news on this tree, as the limbs are littered with little flowering packages of pink and green that are ready to explode like this (below): 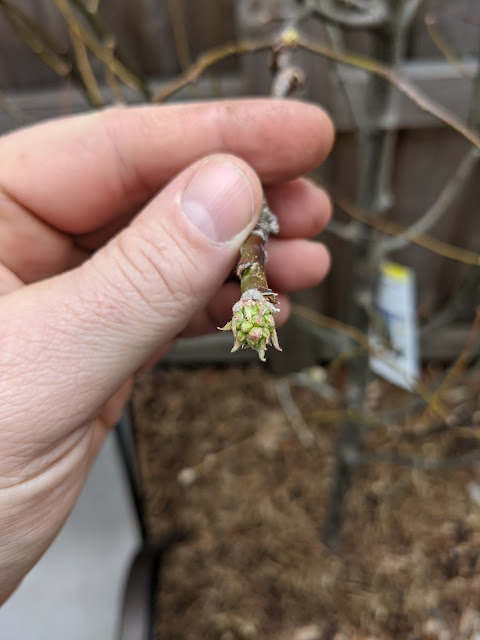 That gets us up to 2.75 out of 5.  55% success rate.  If we lose one of the other two (or, I just decide to remove them), that success rate drops pretty significantly.  The one that has no upper growth will get lop'd off this Spring.  I'm thinking of just taking the top off and trying to drive some new growth due to stress.