In our indoor container garden collection, we have a few succulents that we've picked up over the years including the Burro's Tail that I bought home from the office and (just last week) began the process of planting some cuttings.   Upstairs, in the sunniest spot, we also have a container of Firesticks Cactus that I planted in 2018.  I managed to drag that Firesticks outside last Summer and then back in before Fall and it seems to have thrived the past year or two.  It is pretty big and likely in need of a new container.  But, more on that succulent in a separate post.

This is about a new (to us) succulent that I picked up recently at Home Depot.  It was a $3.98 2.5" plastic nursery pot that has these plump, crinkle-ended leaves/lobes.  For now, I decided to just leave the Key Lime Pie succulent in the plastic nursery pot and stuck it inside a larger, terra cotta container that doesn't (currently) have a hole punched out of the bottom, but appears to be able to have one?  Weird, I know, but maybe I'll post about that situation specifically at some point.

This little 2.5" succulent has a lot of draw to it.  Below, you can see what it looks like now: 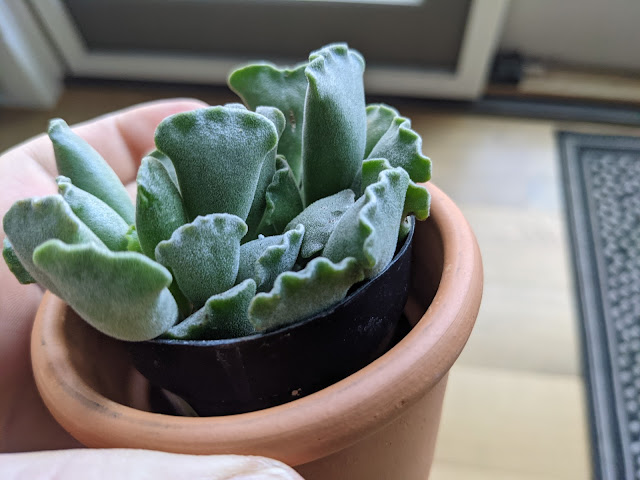 Over at Succulents and Sunshine, they have a listing for Key Lime Pie and provide two other names:  Adromischus cristatus.  And "Crinkle-Leaf Plant".

From the top/down, you can see how all these little triangle-shaped leaves (are they called leaves??) fit in and grow outwardly.  There are a few newly-formed leaves/lobes that are coming up in the middle. 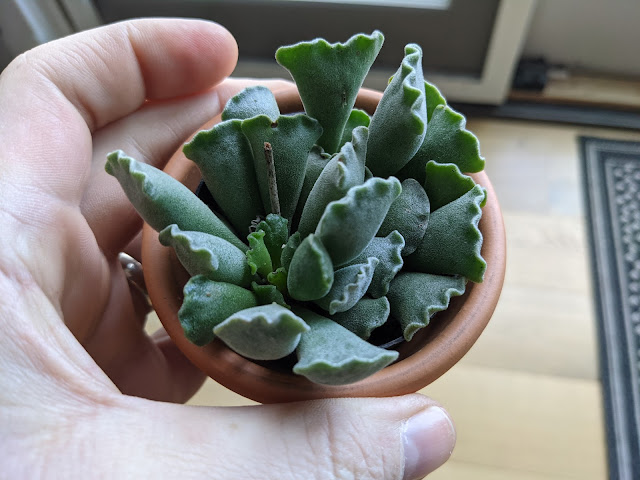 The listing from Succulents and Sunshine claims it can grow up to 18" tall and 24" wide - which is pretty big, right?  Succulent City has conflicting size information saying that it can get *just* 4-6" tall, but confirms the 24" width.   Guess we'll have to watch how this one goes and then consider transplanting it later this Summer.