Like a lot of you guys, the year of working-from-home caused me to have a little work plant casualty.  On the ledge at the Aon Center, I was keeping a couple of pots/containers of a Burro's Tail succulents that when we SUDDENLY decided to just stop going into the office were mostly abandoned.  The last time that I posted about them was at the end of October 2018 here on the blog.  Well, thanks to our office services team, one of those containers somehow survived the Spring and Summer, so when I ventured into the office in Fall of 2020, I was able to bring one of them home and nurse it along this Winter.

I mostly neglected it the past four months, giving it occasional water.  And, here's what it looks like now: 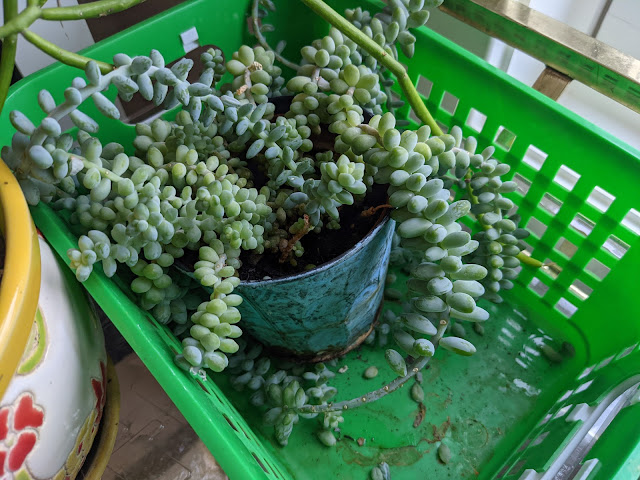 The container that I have on hand is the very one that I started with cuttings from the parent succulent that I was given by a co-worker who was leaving.  If you look at the bottom of the green bin that this container is sitting in, you can see a bunch of lobes of the plant laying there on the bottom.  Those, are the very things that I used - in the past - to grow this plant anew.

Earlier this morning, I grabbed seven of those very lobes and tucked them into a little container with the hopes that they'll root up and give me another Burros Tail container.  Here's what those seven look like as of this morning: 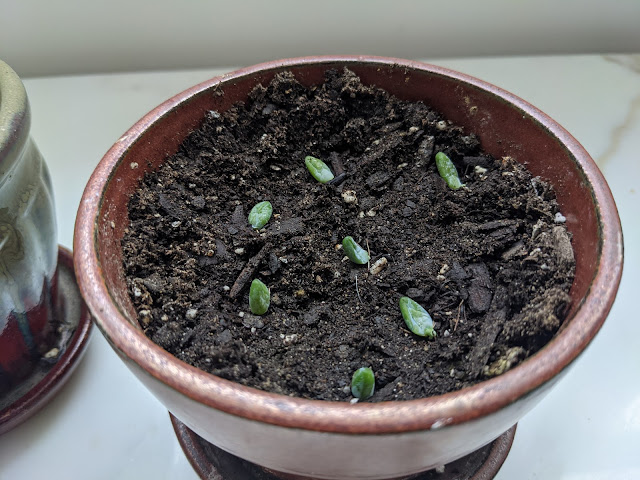 I'll do my best to provide these with a tiny bit of water every once in a while and deliver it via some small drop-like vessel as to not disturb the soil and kind of 'bury' the little starting lobes.  These things have mostly survived on their own WITHOUT much water in the bottom of the green bin, so I'm thinking that less water is better than too much water at this point, right?
Burro's Tail container gardening garden diary office plant potted plants succulent cuttings succulents
Location: Downers Grove, IL, USA