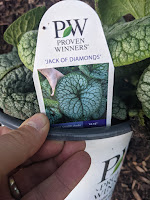 Mid-July is when the big box stores start to put some of their perennials on 50% off sales.  They have their trees and shrubs that have been picked over out on pallets with big 50% off signs, but they also begin to put some of the perennials inside the garden center, including shade plants on discounts, too.  On one of my trips to one of the Home Depots near us, I found some of these Jack of Diamonds' Brunnera in 1# nursery pots from Proven Winners that were marked down 66% - making them three for the price of one.   These are the second set of Brunnera that we now have in the yard with the first ones (a trio of three) were these Queen of Hearts ones that I planted in June of this year in the shade of our backyard.  These are new to me this year, but were on the list that Laura from Garden Answer published of her favorite shade perennials.
The Queen of Hearts Brunnera are planted in a border mixed with some hostas and they've done well this first year.  The leaves are getting bigger and putting out a little bit of silver on the tops of their medium-sized foliage that look nice mixed in with hostas.    Walter's Garden has this listing for
Brunnera macrophylla 'Jack of Diamonds' where they describe that this has large leaves - which is one of the things I'm drawn to right now:

This shade perennial can best be described as a giant version of the classic 'Jack Frost'-with a twist. The huge 9-10" leaves overlap dramatically at the base giving it a shape similar to the snail delicacy escargot. Overall, the foliage is circular from a distance. The leaves have a heavy silver overlay with vivid wide, dark green veining pattern. From mid to late spring, baby blue, forget-me-not type blossoms are held in clusters above the foliage.

These plants were healthy when I took them home despite being left around the nursery for months. 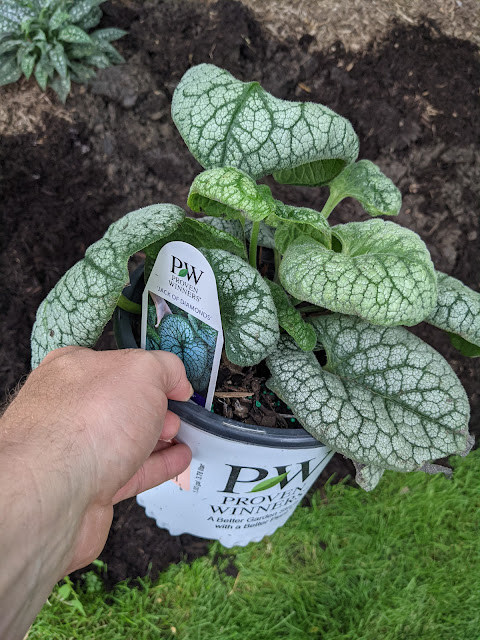 For these new 'Jack of Diamonds' cultivar, I decided to lay them out on the opposite side of the backyard and thought they'd play off nicely against the silver-dotted Twinkle Toes Lungwort that you can see on the left side of the photo below. 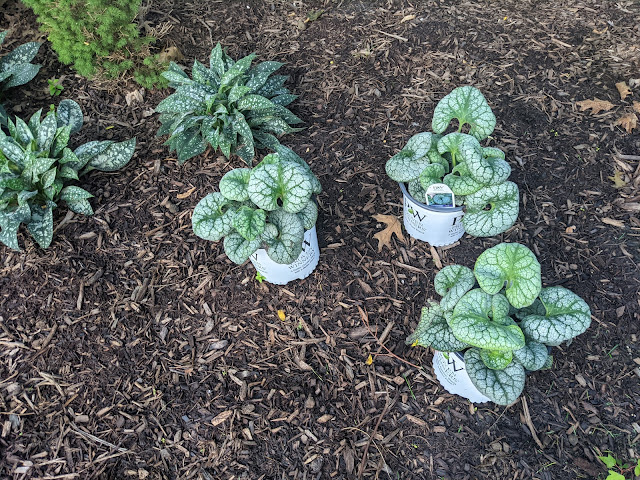 I moved the mulch aside, dug some good holes and stuck them in the ground.  Then, after watering them in, I reapplied the mulch and put them to bed. 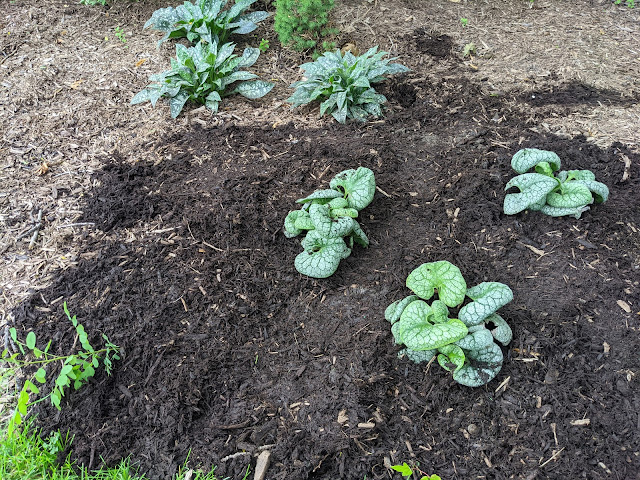