For the better part of the Spring and beginning of Summer, our area was in a drought.  We had very little rain.  Then, starting about three or four weeks ago, we had TONS of rain.  The problem is that the drought we experienced was hard on a lot of our garden and yard.  I kept up on watering as best that I could, but since we don't have built-in irrigation, I was bound to miss some things.

One of the trees that has suffered from the lack of water this year is our little Weeping White Spruce.  Here, below, is a photo showing how it has dropped a bunch of needles and has a lot of brown on it.  I'm very concerned about it not being able to recover and is on the way towards browning out completely. 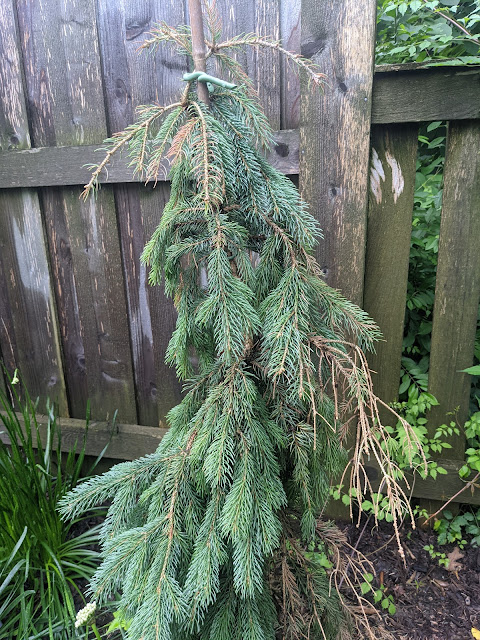 I noticed it browning out when we came back from a week in Wisconsin and since then, I've tried to baby it with water - every few days a direct watering from the hose.

This story from the University of Minnesota Extension office talks about the drought and watering of trees and says that we need to tend to trees for more than just their first or second growing season.  They say that for the first three to five years, we should be giving a tree 20 gallons.

Ensure that newly planted trees receive 20 gallons of water a week for the first three to five years. When watering, do so in a way that allows the water to penetrate and wet the soil to below the existing root depth.

I know that I haven't been doing twenty gallons on this tree, but I'm going to focus on it during the next few weeks in hopes that I can turn it around and help it recover from the drought-related needle drop.

The last time I was paying attention to this tree was in late Spring when I pruned off the multiple leaders to try to create a central one.