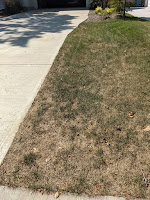 When I put together my 2021 to-do list, I included as #3 the idea of working the 'in between two driveways' area.  I mentioned that I needed to add a layer of mulch and think about doing even more.  I did some of that - mulched AND added a trio of Serendipity Allium to the bed.  And, the Chanticleer Pear Tree (after some hard pruning) seems to be on track.  (I'm not sure that's a good thing...but that's for another day.) But that's the extent of the work over there so far.

Revisiting what I wrote back in late February about this area, I mentioned doing more:

Later on (after I published my list), I wrote a post expounding on this area and even had some thinking about the area and converting it from turf grass.  But, I never got around to doing that very thing.

Why post about it now?  Because, after a hard Summer of sun beating down on it, I am reminded why this area is so problematic.  See below for what it looks like right now:  Hard, dry, brittle and brown. 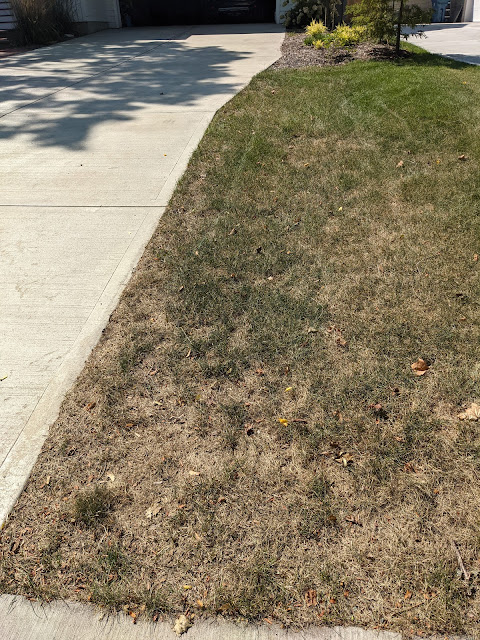 I've watered this area from time-to-time, but it always (season-after-season) returns to looking like this: dormant grass that is surrounded by a concrete driveway on one side.  A concrete sidewalk on the other.  Not great.

But, could this Fall be a chance to bite off a small part of this larger project?

Back in that initial post in March, I included this draft schematic of one way to approach this area.  See below - where I called for converting MUCH of this area into a linear border or bed. 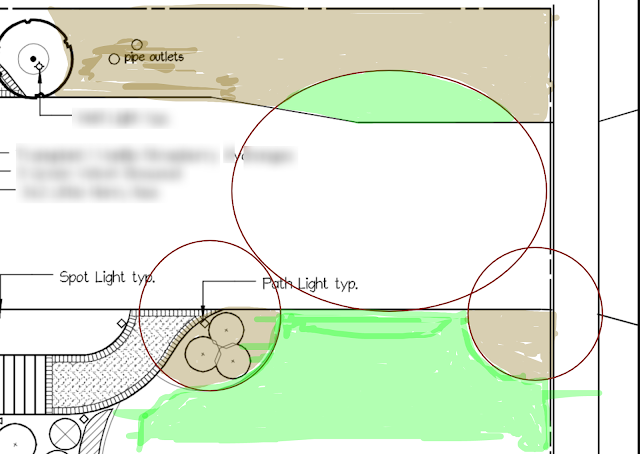 I mentioned in the post that perhaps I could put down some of the Lemon Coral Sedum in this area as a ground cover of sorts.  Welp, I have a lot of it right now - and it has overwintered for me in spots.  I'm thinking I can carve out a much smaller section - the hardest hit by the sidewalk - and start with a small bed there.  See below - I'm thinking of cutting just the red portion out and planting it this Fall. 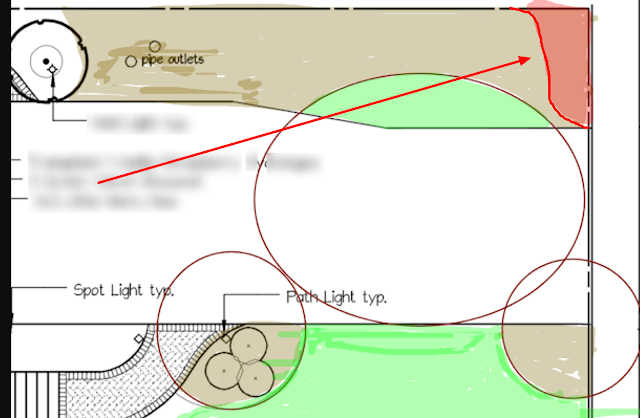 What else gets planted in the Fall?  Bulbs.  I'm thinking I can put down a set of tulip bulbs (first), then transplant the Lemon Coral Sedum on top.  If it survives the Winter, we'll have a nice mat there in the Spring.

In that red area above, part of it is ALREADY a bed.  There's a large tree in that corner, so it wouldn't be a lot of turf removal.  I'm also pretty sure that this area needs some help in terms of amended soil.  When I remove the turf, I'll want to add in a layer of compost, then top it with mulch.

I'm thinking the Sedum would fare FAR better than grass.

I mean....why fight nature, right?  If this is a hard-to-grow area for grass, let's convert it.