In our backyard, we have a couple of large, mature Black Walnut trees.  Three large ones inside our property line and a massive one just behind our fence in an easement.  They were here when we arrived and they'll be here after we leave.  Each Fall, they drop walnuts.  A.LOT.OF.WALNUTS.  This presents quite a feast to the critters around our yard as they peel them open, scatter the husks and try to get to the nut.  The squirrels - in particular - seem quite fond of these black walnuts.  They're called Black Walnuts, but when they drop they're actually green.

Now, if you go read on the Web, you'll find that many people talk about how Walnut trees produce something called juglone, which *could* cause injury to other plants, vegetables and some trees and shrubs. I say COULD because it seems that it is a commonly accepted notion by many, but there's still some dispute about whether the damage is true. One thing *is* clear: the trees, do, indeed produce juglone.  But, some arborists and foresters say that perhaps the damage that is observed isn't the result of the chemical, but rather from being out-competed for light, water and nutrients.

In each of the Fall seasons that we've had since we moved onto the property, I've mostly just let nature take its course on the fallen walnuts.  The critters would get to most of them and then some would just naturally rot in place.  The last few Falls, I've grabbed a couple dozen and brought them over to my Dad so he could feed his critters during the Winter.  He would dole out a walnut every few days in their backyard and it would promptly disappear.

This Fall's crop came down in September and October and thanks to the YouTube algorithm, I was served up some videos of people who harvest their walnuts and process them for eating.  After watching those, I was intrigued, so I began to collect some of the nuts.  I grabbed a five-gallon bucket and started to pick them up.  After a few days, I had the bucket filled up.  I slapped a lid on the bucket and just kind of left it for a couple of days.

While that happened, the Bird came inside and had her hands covered in brown/black stain.  She said it was from the walnuts.  She was out there being a kid and started peeling them.  The stain wouldn't come off with water in the sink.  So, I went back on the Web to figure out how to get it off her hands and THAT'S when I was served up this video: How to make black walnut stain from scratch.  It was less than two minutes and the Northwest Forager showed a pretty simple process.

Step 1: Collect black walnuts
Step 2: Peel them apart/break them up
Step 3: Cover them in water.
Step 4: Stir
Step 5: Wait a couple of weeks
Step 6: Strain out the liquid stain
Step 7: To store it, mix the stain with a 1:1 ratio of rubbing alcohol

Trying to make stain seemed more up my alley than harvesting walnuts to eat (at least this season).  And, with Christmas coming, I knew a couple of woodworkers who we could gift the stain to this December.

I went out and grabbed the bucket of Walnuts to get started.  By now, all of them had turned from green to black.  And, since I kept the lid on the bucket (just for a short period of time), some of the walnuts had formed a little bit of grey mold on them. That's just fine, I'm thinking, right?

I grabbed a pair of disposable gloves and went out side to begin shelling the nuts.  They peeled off very easily.  In the video, the Northwest Forager removed the nut from the husk and set the nut aside.  Since I'm not planning on using the nuts, I just left them in the bucket.  After knocking all the nuts around and peeling off most of the husk, I filled the bucket up with water to just above the walnuts.

Below, you can see the current state of the black walnut slurry: 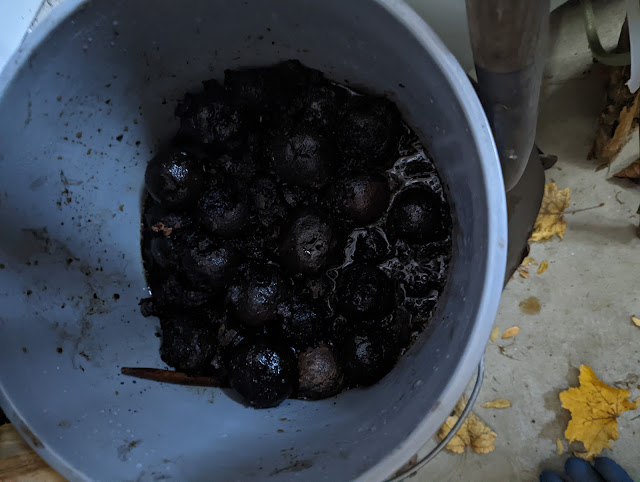 The Northwest Forager says that you should store this mixture for 'the next few weeks' and that at that point, it will turn into a syrup.  With four weeks until Christmas, I'm thinking check on it in early December and then again in mid-December.  Then, if things work out, I'll bottle it up for Christmas.  And, if I end up with an abundance of stain?  I could even try to use it on the wooden patio container box that has been sitting on my annual garden to-do list for a couple of years.  This year it was on #4 - to 'stain the patio box'.  Just like the Cubs:  there's always next year.
diy projects garden diary tree diary Walnut Trees wood stain
Location: Downers Grove, IL, USA