I thought we'd see a lot of these Walt Disney World 50th Anniversary "Fab 50" statues.  But, due to some unforeseen circumstances, I only took a single photo of *just* one of the golden (EARidescent is what they're calling them, I think) character statues that is inside of the Magic Kingdom. Luckily, it is a guy who's big in our house - Pooh Bear.  And, it is a double feature that has the big guy (Winnie the Pooh) giving a nice cuddle to his pal Piglet. 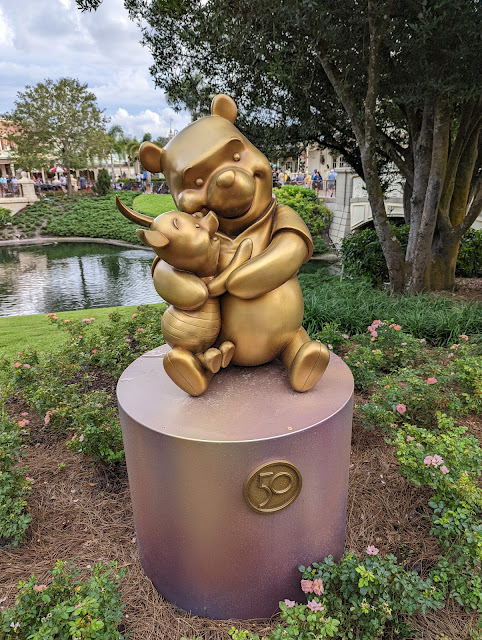 Guess we'll have to go back before the 50th Anniversary Celebration is over.
I know this is a minor thing, but it bothers me that there aren't REALLY 50 statues like this one for the 50th Anniversary of Walt Disney World - the Vacation Kingdom.  There are *ONLY* 36 statues.  A bunch of them are two-fers like this Pooh Bear/Piglet one above.  I know that costs are important, but feels like a little bit of the bean counters winning out.
50th Anniversary disney disney characters disney world magic kindom piglet pooh bear statues thanks COVID travel walt disney world wdw winnie the pooh
Location: 1365 West Monorail Way, Orlando, FL 32836, USA