The last time that I checked in on the five Amaryllis Christmas bulbs was almost two weeks ago.  We have five bulbs in three planters.  And three different varieties.  In late November, we had growth from all five with the initial appearance of a few of the flower bulbs.  Today?  We have stalks shooting up in four of the five.  And good foliage growth in the final one.  Below, in the photo, you can see all of them.  On the right is the largest bulb (Sunshine Nymph).  Behind it is the slowest starter, but another good-sized bulb (Lemon Star).  And on the right is the trio of the big-box bulbs (Red Lion). 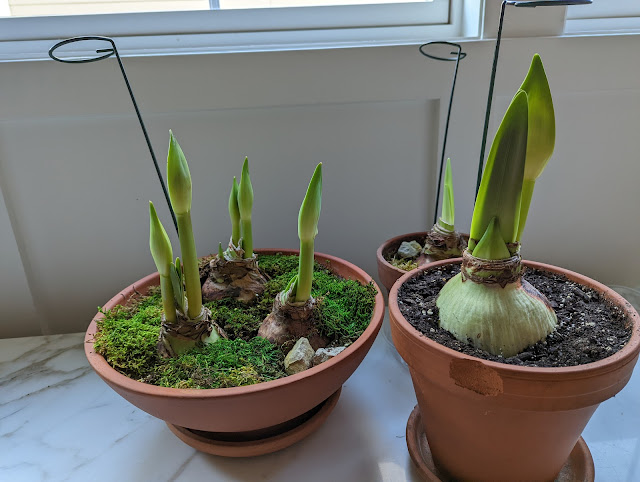 Now is the time that I'm going to begin to start 'poisoning' them with an alcohol/water mixture in an attempt to stunt their growth (so they don't get too 'leggy' and flop over).  Without a true 'control' bulb, I won't really know if the alcohol mixture is working.

One other note:  when were picking out the bulbs, so too was another woman.  When the Bird grabbed the Lemon Star Amaryllis, the woman casually mentioned that 'she tried that one last year, but it didn't work' - which we took to mean that it never quite took off.  We've had that happen before:  a bulb from Menards (the last one I bought there) sent up some green tips.  But, never sent up a flower.

Knowing that happened to her last year has me watching ours pretty closely this year.  So far, I haven't seen any flower bud begin to emerge, but the green tips continue to grow.  *Fingers Crossed* that it takes off.  With the pace of it (currently), it is pretty clear that the Lemon Star won't make a Christmas-week debut for bloomtime.  That's ok...we'll have Christmas Flowers in January and beyond.