We keep the majority of our potted plants/containers/house plants in two places for *most* of the year. The first is outside.  And that usually is between about June and September.  The second is our screened porch.  And that's from September to January.  And again from about March to June. On the porch, we have a corner table that holds a few containers and the top of one of our firewood racks is the other spot for the pots.  The porch is useable for about 300ish days a year for us and about the same for our plants.  The porch gets a TON of natural light and the plants don't seem to dry out as much out there as they do once we bring them in the house.

In year's past, we've brought them in the house in January and they've struggled.  These came in about three weeks ago and (knock, wood), they're doing ok (so far).  We've tried a few places - upstairs in a south-facing window. Downstairs in same facing.  Indirect light, direct light.  It seems that the best one can HOPE for during these tough months is simply: survival.

Now, I don't know if this is ACTUALLY the proper thing to do, but we stop feeding our containers during the Fall and Winter.  I give them a good feeding before they go into the screened porch for the season in September, but after that...no fertilizer.

However, this year, I've decided to try to assist some of them with light.  We've split up the plants between those same south-facing windows on the first and second floors AND a window in my office.  It faces west.  So, my thought is somewhat supplement or even... 'enhance' the lighting situation with a grow light.  Through both longer hours and a more focused/intensive

I bought one of those blue/red/combo lights and set it up.  For now...I'm using it as a kind of supplemental light.  These plants and containers are still getting natural light, but with the days short this time of year, I have the light set up on a timer to go on in the early am and run for 3 hours.  A little extra boost of light.

I'm currently running it with *just* the blue lights on, but I'll experiment with the reds and the combo in the coming weeks once I see how the plants are adjusting to being indoors and under the light. From what I've read, blue light helps with foliage while red light will assist in blooming and fruiting.  We have one African Violet in the stand you see below (flowering), but the balance of the plants are foliage plants like ferns, succulents, Creeping Fig Vine and a couple varieties of Monstera. 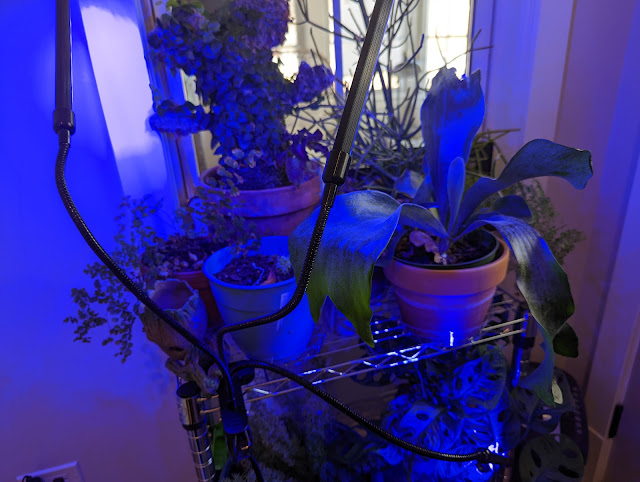