I make exactly ONE "stunt pizza" at home.  It is a BBQ chicken pizza that I call the "Orange Bird" that features chicken and double application of a store-bought sweet bbq sauce.  First I apply the sauce to the chassis and then, post-oven, I squeeze on a drizzle (it is, I suppose, *more* than a drizzle, but less than a full slather) on top.  I've added this post-oven drizzle after I found the pice a little dry but that the sauce burns pretty easily when put on top pre-bake.  In this case, (once I de-pan the pie) I put down (first) a heavy hand of post-oven Romano scattered on top, then after waiting a beat, I put down this sauce which finishes with the heat off the top of the pizza.

Btw....you might be wondering what a 'stunt pizza' is?  Urban Dictionary has an entry that sums up the term pretty well, but that's not where I picked up the term.  It was from Pizza Blogger Adam Kuban - somewhere along the lines of following him online in various places.

With the Orange Bird (Pizza-related trademark pending1) - just like my other pies - I effort to throw off a frico edge, but I use a traditional orange cheddar.  You can see a peek at the Orange Bird below - but this one is a slight further modification of my Chicago Thin formulate.  I've increased the White Cornmeal 3x which drops the hydration percentage from 51% down to 47%. 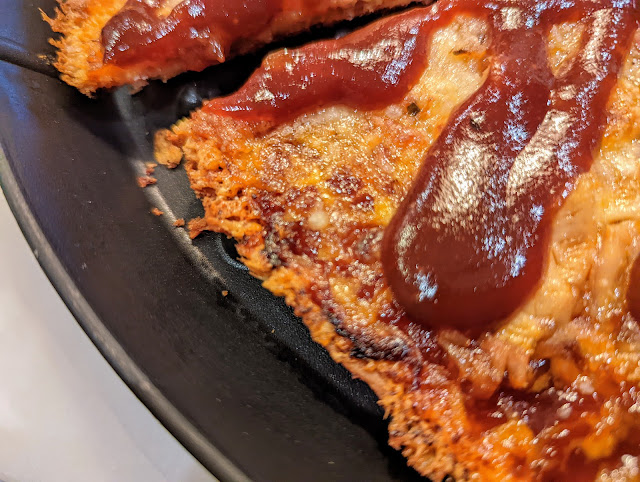 The last time I posted a pizza (Chicago Thin) post was earlier this month with a pepperoni Chicago thin that I made in my deep-dish pans.    I'll keep refining these Chicago Thin/Bar Pizza hybrids, but I think I've dialed in with this 47% hydration dough pretty closely.  One of the key learnings is that with this dough, I do NOT need to utilize ANY bench flour - which doesn't alter the formulation, but...more importantly...makes A LOT less mess in the kitchen.