Last Fall, I was moving around a few pieces of flagstone in our yard when I - for some reason - looked closer at one of the stones and I realized I was staring at a fossil.  Weird.  Or at least it seemed weird to me.  I examined the piece of flagstone and realized there were a few fossils imprinted in the stone, so I went looking on the Web to figure out what we had.  Turns out, we're the owner of some Trilobites that are hundreds of millions of years old (yes...read that again...hundreds of millions of years old).  Kinda neat, right?  Finding it and researching the fossil was a fun little exercise to do with the kids.

Imagine my delight when I was out in the yard this past week and noticed that a few of our pieces of flagstone and split open due to the winter and freezing.  I picked the pieces up to see if any of the freshly-revealed surfaces showed off any new (to us) fossils.  And, sure enough....along the edge of one of them looks like this: 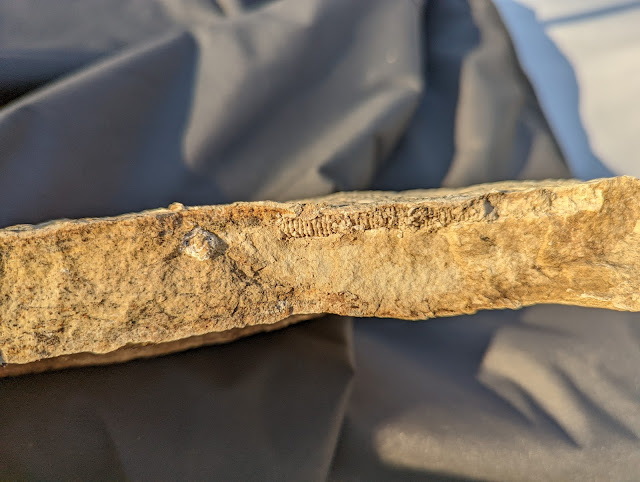 Below is another, more zoom'd-out view of the same edge of flagstone showing this worm-like fossil.  Based on a quick run around the Google machine, I think this might be crinoid fossil or...perhaps (but not likely a palaeoscolecid fossil. 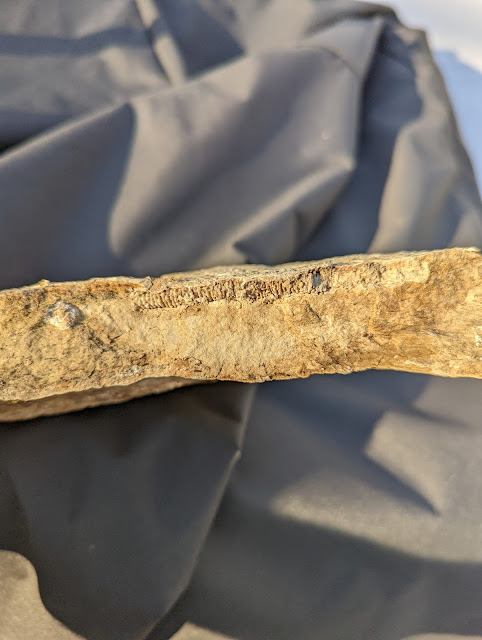 What is a Crinoid fossil?  First, check out this page from the Illinois State Geological Survey.

When the animal dies, the plates and discs tend to fall apart and sink to the sea floor. Crinoid stems or stem discs are common throughout most of Illinois, and their popular names include "Indian beads" or "fish bones." Many of the limestone beds in Illinois are composed mostly of crinoid plates and discs.

They're NOT plants, but rather marine animals.  That's interesting.   They're also 'common' in Illinois - which is WHY this one is in our suburban backyard.
For more information, head over to this listing on the British Geological Survey page where they describe Crinoids as:

Crinoids are marine animals belonging to the phylum Echinodermata and the class Crinoidea. They are an ancient fossil group that first appeared in the seas of the mid Cambrian, about 300 million years before dinosaurs. They flourished in the Palaeozoic and Mesozoic eras and some survive to the present day.

I posted my first fossil - the Trilobites - as an NFT on Open Sea.  Why?  Just to try to figure out the NFT world and how OpenSea works.  Maybe I should do the same with this one.

Speaking of NFTs...I have a few that I've 'bought' in my collection on Veve.  I'll post about those this week.