I've been known to garbage pick.  At the curb.  Not in dumpsters and other what-have-yous.  You know the move:  people put stuff out on the curb on their garbage day (or very often...on Saturdays or Sundays when they've just done a clean-up project) and if someone doesn't grab whatever the thing is, it goes into the truck on pickup day.  I posted about an organ late last year and when we lived back in Elmhurst, they had this wonderful, annual all-city-wide amnesty day.  You could put anything you wanted on the curb and the garbage guys would take it; no stickers needed.  That was always a fun hour of driving around seeing what people were tossing.

Mostly, you find junk.  And, this time, I think that's what I found:  junk.  It is metal.  So, the most likely picker is one of those guys in the pickup trucks with wood boards that extend the height of the bed and have all sorts of metal objects tossed in there.  I call them the "metal guys".  They only focus on things they can scrap.

So, what did I grab before one of the "metal guys" could grab it?  This: 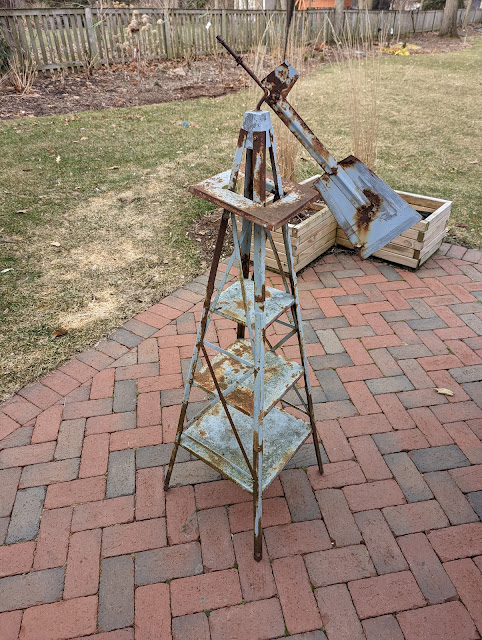 I'm pretty confident that it is a piece of primitive garden art in the form of a mini windmill.  Without the wheel in the front of the windmill.

What would you have done if you saw this thing on the curb?  Just drive by?  I saw it, whispered my collecting mantra to myself...and then still felt compelled to bring it home.  My thought was: I can figure out how to use this as a trellis in my garden.  And if not...I can just put it back on the curb and the "metal guys" will grab it.

That's where my head is:  garden trellis or obelisk.  I posted about how I ordered some lumber to make a garden obelisk when COVID started and....sadly...I never got around to building it.  Lumbers still here.  Just haven't done the project.

This vintage, found windmill is now basically an obelisk, right?  It stands 54" tall - so a bit shorter than I would have built with wood.  And 16 inch square at the four-legged base.

Seems that I have a couple of options:

1.  Placing it in one of the beds in back and having a vine/climbing plant go up it.

2.  Buy a larger container - or use one of my wine barrel planters on hand - and stick it in there.  I could put THAT container out in the beds or closer to the patio and run a vine right up it.  By putting it in a planter, we gain that 18-24 inches of height that the planter provides, which puts the top of the windmill obelisk up above six feet tall.  The inspiration obelisk from Gardeners Supply is 7'6".  So, we'd be getting close.

I've been reading about annual vines and maybe this is something I could use to bring that idea to life.  Off I go to research annual vines that work in partial sun.

Oh...forgot to mention one thing:  I don't know if Nat has seen this yet.  She LOATHES garden art.  This might be DOA.

Here's how it usually goes: