This week, ESPN posted a pre-tour-na-ment piece that detailed the fight song, colors, mascot and 'notable alumni' of all 64 teams that made it into March Madness this year.  My Fighting Illini were included in the piece and what ESPN listed there kicked off a text conversation that I had with Equation Boy/Man about the University of Illinois Mount Rushmore and who would be on it.

Four members of the author's "Notable Alumni" list.  Now, before we talk about the folks here - and not here, let me briefly show you what the list looks like for Yale University.  This is what I'd call the 'royal treatment'. 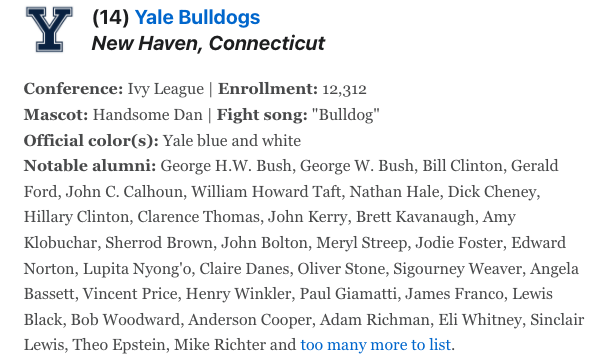 Long list, right?  And, even a link to an even LONGER list on Wikipedia.  Wonder why Yale was given this treatment?  I'm sure...part of it is - of course - the fact that they HAVE a good list.  But, there's more, of course.
Where is ESPN located?  That's right.  The World Wide Leader is, indeed based on Connecticut.  And the author?  Kyle Soppe has a Linkedin profile showing his home being in Connecticut, too.  Too much of a coincidence, right?
This is what some folks would call 'Fake News'.  Or...perhaps....media bias.
Yale University gets 40 people.  Everyone else gets a handful.
(One other note:  Dick Cheney is on there three times. Yale.  Wisconsin.  Wyoming.)
Back to that text thread with Equation Boy/Man.  I sent him the story and asked:  who would be on his University of Illinois Mt. Rushmore.
First, let's talk about the total number.  On the actual Mt. Rushmore, there are just four presidents: George Washington, Thomas Jefferson, Teddy Roosevelt and Abraham Lincoln. But, for our purposes, I'm saying that the University of Illinois Mt. Rushmore can have *more* than four members.
Let's start with the current list via ESPN and their East Coast/Connecticut bias:
1.  Hugh Hefner
2.  Jesse Jackson
3.  Dick Butkus
4.  Deron Williams
First, I'm not certain that Deron Williams graduated.  So, in that sense, we're going to take some license here with the notion of 'Alumni' and include individuals who 'attended' the University of Illinois, but perhaps didn't graduate.
Second, that list of the first four is just fine.  There are two that are first-ballot Mt. Rushmore members though:  Hefner and Butkus.
Who else?   Here's the list that came about via my text exchange with Equation Boy/Man:
5.  Nick Offerman
6.  Andy Richter
7.  Ang Lee
8.  "The YouTube Guy" - Steve Chen
9.   Roger Ebert
10. Marc Andreesen
11. Larry Ellison
12.  Ron Popeil
13.  Gene Hackman
14.  Shel Silverstein
15. Ray Ozzie
16.  Bill Geist
17.  Jerry Orbach
18. Alan Ruck
19. Lou Boudreau
20. Robert Novak
That's a list of twenty that we can start from.  There are, of course, some other honorary members.
21.  Rusty Griswold from Christas Vacation
22.  Cam Tucker from Modern Family
23.  Joel Goodsen from Risky Business
24.  Lt. Col. Henry Blake from M*A*S*H
That gets us to 24 in total.
I'm going to narrow down my list here to just four - per the Mt. Rushmore requirements.
1.  Hugh Hefner
2.  Dick Butkus
3.  Nick Offerman
4.  Jesse Jackson
Offerman is the outlier, but he warrants inclusion based on how much he promotes the school and is still connected to the orange and blue.
I'd say that I think our 'honorary members' are very likely who I would slot in the 5,6,7 and 8 slots.  Is that cheating?  I don't think so.
5. Rusty Griswold (Christmas Vacation version)
6. Cam Tucker - former member of the Fighting Illini football team.
7.  Joel Goodsen - Looks like its the University of Illinois.
8.  Henry Blake
I mean....look at *that* sweater? 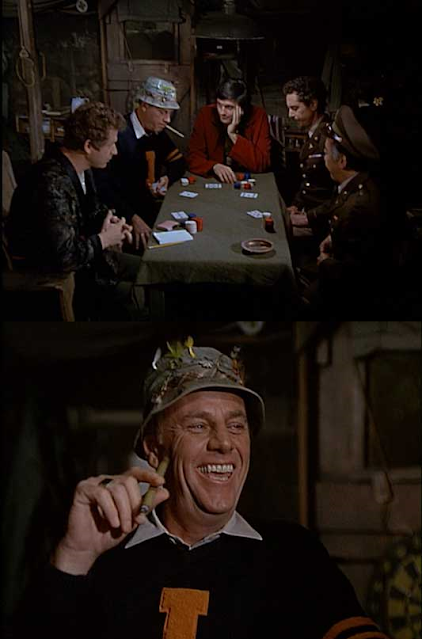 Just off the list?  he group that moves culture in our world:  Hackman, Silverstein, Lee.
Just below them?  The tech guys:  Andressen, Chen, Ellison.