I've been giving the "in between two driveways" strip some thinking lately - how to edge it (boulders), how to extend the beds to have them make more sense, looking at what worked/didn't work there since last year and what a color palette for this area could/should be. Frankly....I don't have a TON of flowers in any of my beds - as I've been MOSTLY a foliage gardener up there up to this point.   It is #4 on my 2022 to-do list:  "Enhance the IB2DWs Strip".    I already have some purples with the Serendipity Allium and the five BIG Pinball Wizard bulbs that I planted last year.  And, taking what I've learned from Amy at Pretty Purple Door about color combinations, one path forward is what she calls an 'analogous color scheme' - that includes three adjacent colors on the color wheel.  In this case, it would be using the three colors of:  purple, violet and blue in those front beds.  And, maybe beyond - like under the Norway Maple - to bring some cohesion to the front garden with perennial flowers.

As I've watched (and learned from) Roy Diblik from Northwind Perennial Farm up in Wisconsin (and on YouTube), he introduced a plant to me that he uses in his 'patterns':  Nepeta.  I've come across it a bunch at various garden centers, but when I was a Big Box nursery this past weekend, I found a sport called "Cat's Pajamas" that caught my attention.  Why?  Because on the tag it read:  "Perennial of the Year".  I took this photo below: 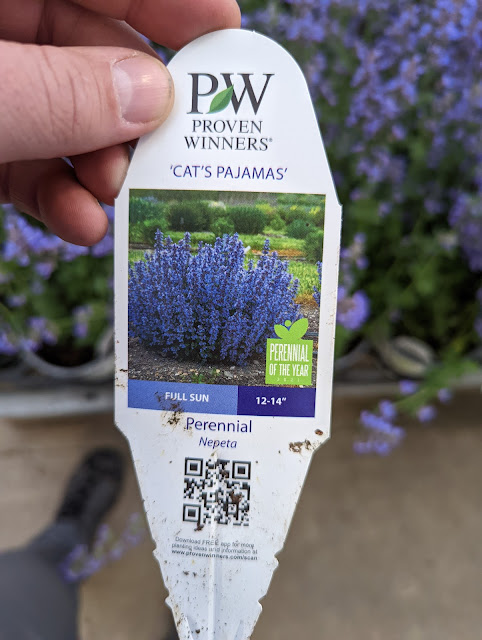 And then went online to learn more.  Turns out, Nepeta 'Cat's Pajamas' was 2021 Perennial of the Year.  Here's the listing on the National Plant of the Year site.  They tout some of the features like:  it works in hot, sunny locations.   How this cultivar is the 'most well-behaved catmint', is pollinator-friendly, and won't split open/splay.   The page talks about the shape being like a 'blue bowling ball' and that it blooms early and if you cut it back (Chelsea Chop??), it will bloom all season long.

I found this inspiration photo (below) from Hoffman Nursery showing Nepeta and a Blue Fescue paired together:
That's where they tout the Blue Fescue Grass as a 'fun planting partner' for Cat's Pajamas Nepeta, "because the two share a similar overall shape and cool color palette. The blue tones of the grass continue the look even when the catmint isn’t in bloom."

When I looked a little further inside the nursery on the benches where the Nepeta was sitting, guess what I found?  Blue Fescue Grass.  Here, below, is a photo showing the two sitting in front/back of each other looking like great companions.

I brought home three of each and am going to plant them together.  But, where?  Down at the sidewalk - where I have had so much trouble over the years?  Or, up closer to the Bald Cypress tree to 'finish' off that bed?  Right now, I have JUST this set, but maybe the right answer is to plant in BOTH - and go back and buy another, similar set.  Also, adding a little Lamb's Ear in both spots would make for a great third planting.