Last Fall, I went around and started to divide up a bunch of Karl Foerster Feather Reed Grasses that were either suffering from some 'center rot' or simply just large enough clumps to warrant division.  There were two sets: one in between our driveway and front stoop that had three and another set out of our kitchen window that had five.

As I look around the yard today, I have good news:  All of the divisions were successful and the grasses have come back for Spring.  For now.  First, let's start with the kitchen window grasses.  I hedged a little bit and decided to dig up and divide just TWO of the five.  I left the back three in place.  Below, you can see those three remaining and in front of them a couple of divots where the other two came out. 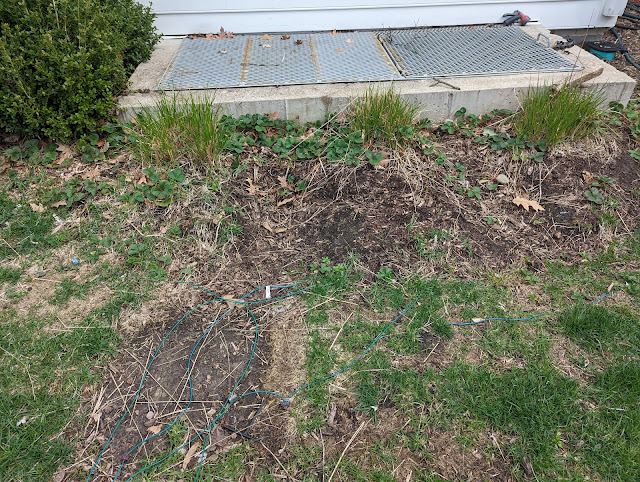 Where did I put them?  I divided both of them into three new grass clumps.  I put the first three on the corner of our patio - you can see below.  These three are happy and green. 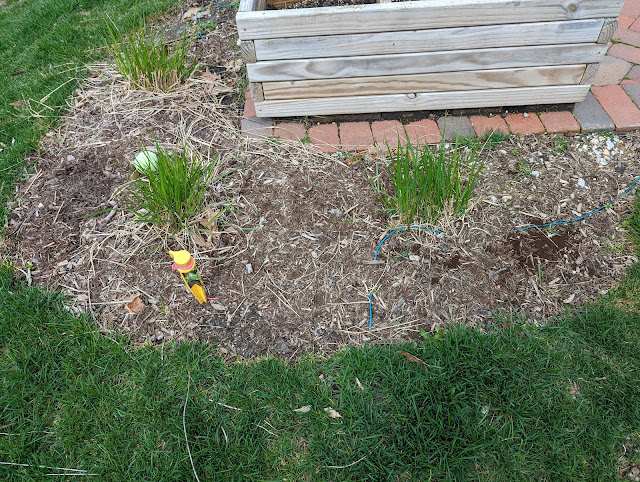 The other one that was divided up into thirds was moved to the north side and I put it right in front of our storm drain.  Those three, too, are happy. 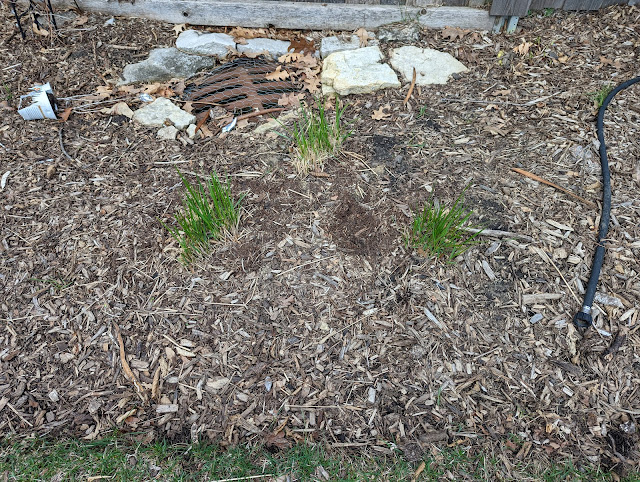 As for the ones in front:  I hedged here, too.  I didn't want to risk losing ALL of them, so I left one in place and divided the other two.  You can see below the back two are small and the front one - which I left in place - is much larger (and suffering from some 'center rot'). 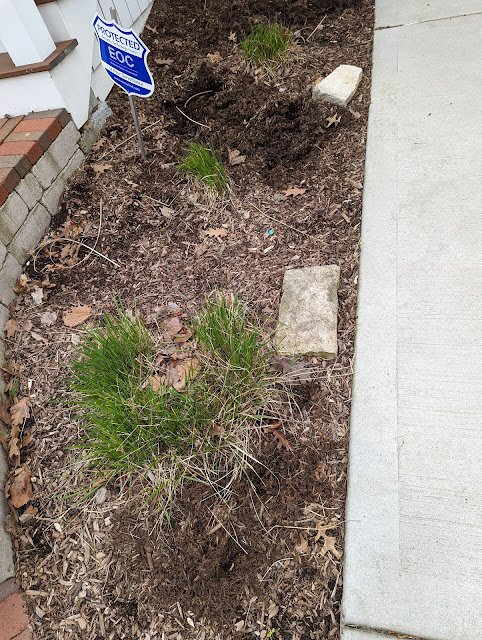 Those two grasses gave me six new divisions.  I put four around the front Norway Maple - which I've had trouble growing ANYTHING under.  All four of them are green and showing new growth - mixed in amongst the tulip foliage that you can see below: 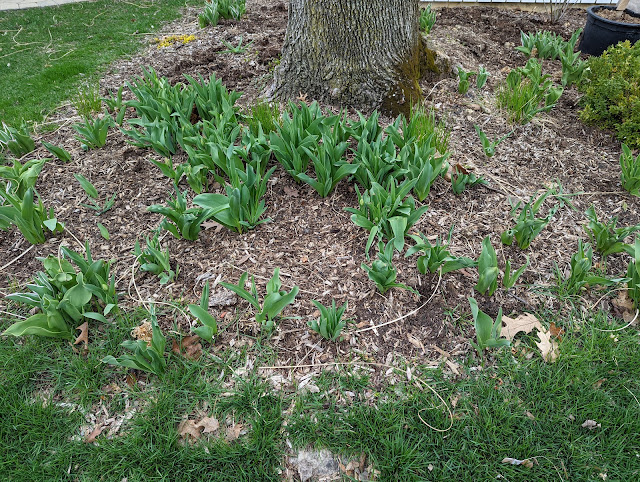 I also tucked one in on the side by our sump pump pipe.  I didn't trim this one up just yet, so it is a mix of green (this year's growth) and brown (last year's growth). 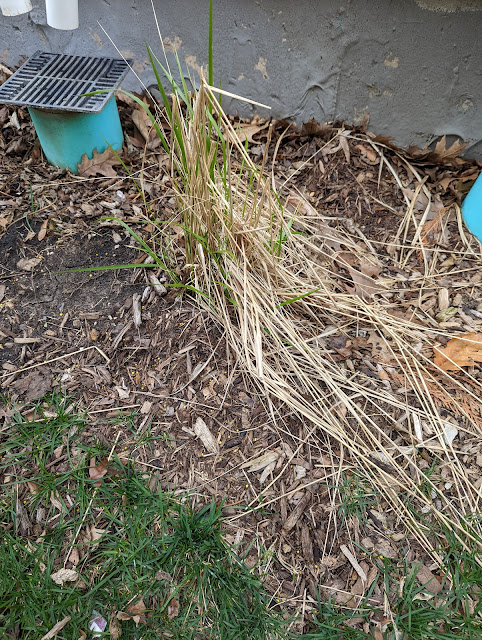 That's five.  The last one was added to the IB2DWs bed to make a set of three.  You can see all three of those below - with the division being at the bottom of the photo. 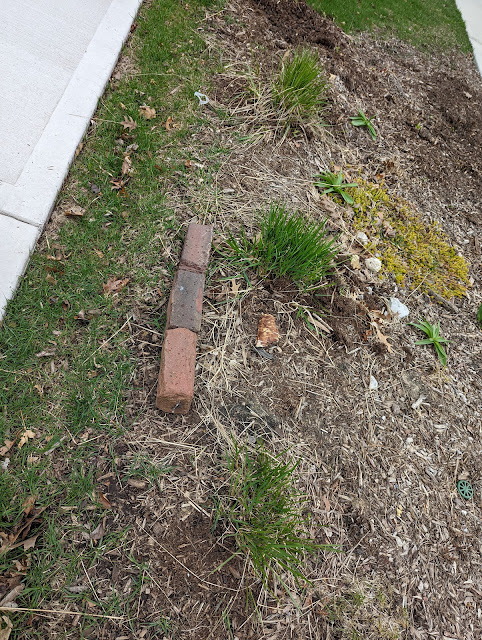 Where does that leave me?  With a near-term goal of solving (partially) for #12 on my 2022 to-do list:  divide more grasses.  According to this post on ProvenWinners, the best time to divide these cool-season ornamental grasses is RIGHT NOW.   I have the three by the kitchen - which should yield nine clumps.  Five of those go back, leaving me with four.   The big one left by the driveway looks to be divisble four-ways.  One goes back, leaving me +3 and +7 in total.  There's one more spot to consider:  outside the screened porch.  There's one there that should be divided. See below. Three-ways with one remaining = +2.  That gives me +9 in total to plant. 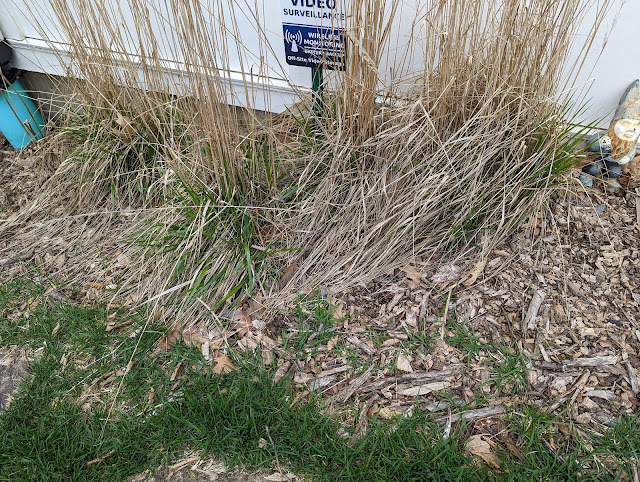 My plan is to use six of the nine in the backyard - with two colonies of three.  One by the fence and the newly planted London Planetrees.  And the other three in a cluster back by the firepit.

The final three are destined for the IB2DWs bed.  Remember how I talked about 2022 to-do list 'crossover appeal' when I posted about the Honey Locust tree seeds?  Same thing here: #12 is work to divide some grasses.  However, #4 is to 'enhance the IB2DWs strip' - which I'll start by transplanting three more Karl Foerster Feather Reed Grasses.