We've had a pair of Rhododendrons that flank the sides of our back stoop since our first year here in Downers Grove.  They've been a mixed bag - evergreen is nice, but they've under performed and have gotten a little leggy in some years.  They're there because that's what our plan called for, but would I plant something else there if I could do it all over again?  Probably.

On one side, I've had some ground cover take root in the shape of a volunteer sedum and that's a nice addition (by accident).  You can see both one of the rhododendrons and the Lemon Coral Sedum at the base in the photo below. 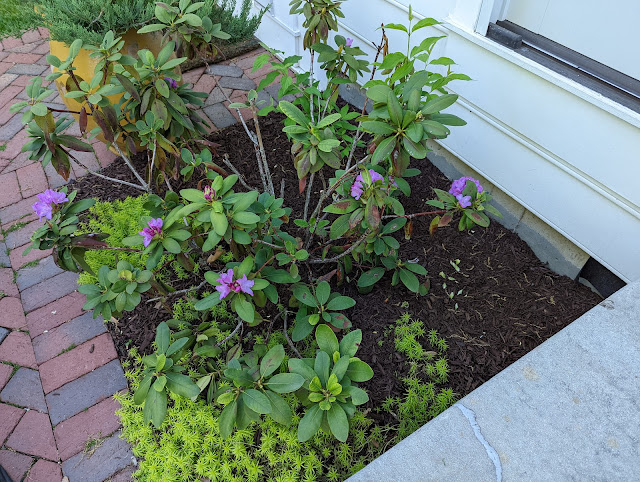 Taking a look back, it seems these bloomed in mid-June last year.  I gave both of these flowering shrubs a bit of a prune last year after they flowered and I'll do the same this year.

I've mentioned trying to use tropicals (and sub-tropicals) in the garden more this year and that is one of the reasons why I *want* these to work so much:  they lend a tropical air to the garden (not to mention that they're SOMEHOW evergreen shrubs).