Earlier this Summer, I planted a series of Caladium tubers DIRECTLY in the beds on the southside - near the Fanal Astilbe colony.  I planted them right on the border of the bed and hoped they'd fill in the gap between the current perennials and the border.  These were bought as tubers from Costco and being a Zone 5b gardener, these are (for us) annuals.  They're also (at least to me) tropicals.  Why do I mention tropicals?  Because one of 2022 to-do items (#14) was to work with more tropicals IN the landscape.  And #16 was to work with shade annuals.  This does BOTH of those things.

Five weeks after planting the tubers, we're seeing some action.  Below is a look at one of these Caladiums that have popped up: 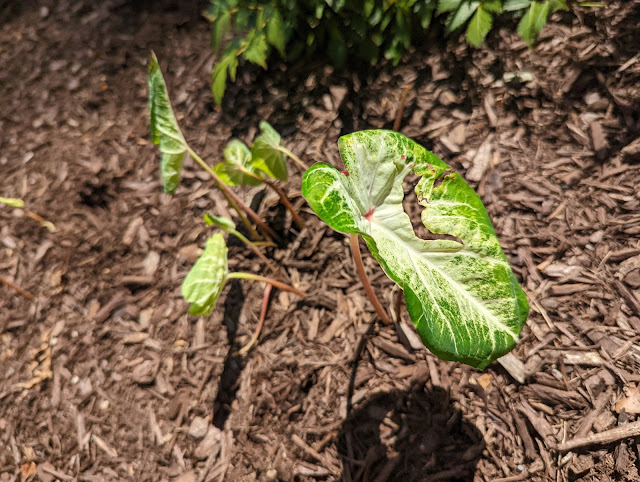 There appear to be five or six groupings of these white Aaron Caldiums that have emerged.  Once they all grow up and leaf-out, I'll take a group photo.

This is my first season growing a GROUP of tropical tubers in the ground and will be something I think about for 2023 and beyond.