Ten days ago, I posted a couple of photos a new (to me) project of trying to grow hydrangeas from cuttings.  I tried two different culitvars (Limelight and Strawberry Vanilla) at the time and frankly...I wasn't sure if what I was doing was going to work and/or if it was going to be too late in the growing season to even attempt these.

I still don't have the answer to the second question (is it too late?), but I do have a mixed-results answer to how they would do.  That answer?  The Limelight seems to have transitioned from cutting to (potentially) rooted.  The Vanilla Strawberry cutting?  Not so much.

Here, below, is the limelight cutting.  The most critical thing to note?  The new, lighter color leaves at the center.  These new leaves are a sign that this cutting has managed to 'take hold': 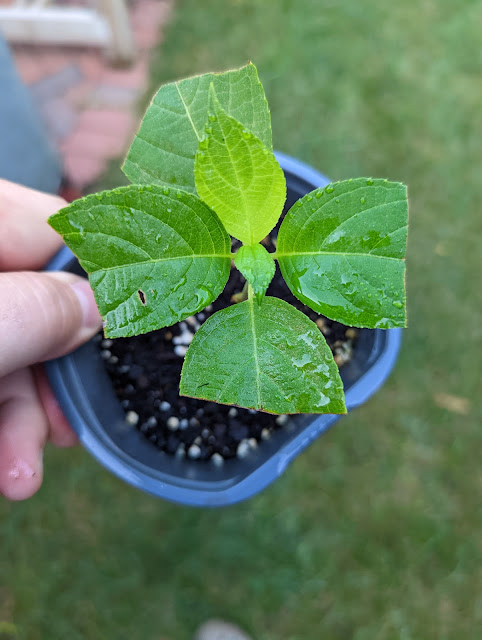 The larger leaves are cut.  And that's on purpose.  I trimmed them in half as a way to try to help the little cutting survive.  Some plantsmen call them 'solar panels' on their cuttings and most recommend that you trim them down to balance the cutting's ability to absorb sunlight, but not too big that require a ton of energy to support.

Compare the photo above to the one in this post when I started earlier this month.

Now...that I've seen this put on new leaves, I'm ALREADY starting to think about how to overwinter this.  There are two enemies:  the cold.  And the dang rabbits.  I'm thinking that I'll handle this cutting the same was as I handle the small seedlings:  digging them into the ground, covering with mulch and surrounding with chicken wire to keep the rabbits at bay.