In October, I began to split all the Norway Maple wood that came from the mature tree that we took down in our front yard.  The crew that took the tree down processed the trunk and major limbs into rounds of various lengths and put them up on a rack in the far back of our property.   That work continued in November and December.   In November, I decided to begin to attack some of the large pieces with a splitting wedge to get some smaller pieces that I could split with my axe and that's been really helpful in getting some of the larger pieces processed.  I've used the fact that some of the wood is just sitting on the ground as a sort-of forcing function to compel me to split those pieces first.  They're the largest ones because I couldn't lift them up on the rack due to their weight.

By November 11th, I noted that some of the freshly-split Norway Maple was *VERY* high in moisture with a reading of 50% moisture.  But, a month later, it was already down to 13%.

I did a firewood check-in on December 1st and noted that I had partially filled one of the sideyard racks with split Norway Maple firewood.  Where is it today?  Have a look at the photo below:  this entire rack is filled with freshly-split Norway Maple firewood.  You can really tell by the color of this stuff that it is fresh and not-seasoned.  It is...almost blonde in color.  Compare the ends of the stuff in the main rack with some of the wood that I've piled on-top of the rack.  Those ends (on top) are dark brown, almost black.  That's one of the 'tells' for seasoned firewood (so is...'checking' on the ends). 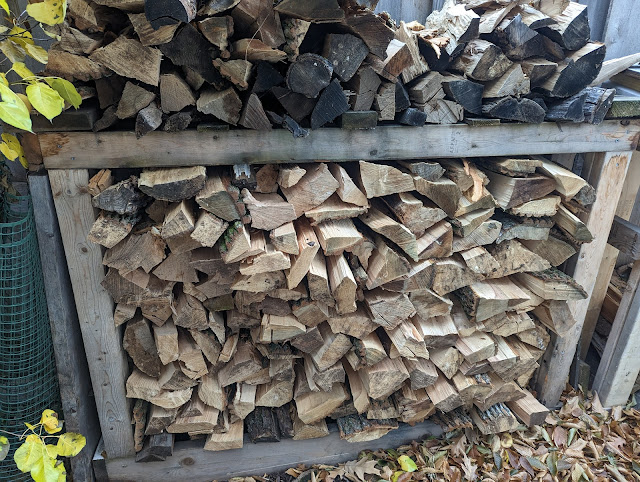 My plan for the rest of this Norway Maple firewood is to continue to split the rounds in the back.  But, instead of lugging it up to the near the house, I'm going to straighten-out that back rack and move some things around.  I'll make some space on one end of the rack to begin to stack the split wood.  That wood - in the far back - is going to be our Summer 2023 firepit wood and I'll use it at the start of our 2023 burning season (if it lasts that long).

I'll do another moisture meter reading this week to see if this wood has dropped even more than it did in the first month or so where it went from 50 to 13 percent.

Everything I've read points to Norway Maple as being very 'fast drying' wood that can be burned in just a few months.  If that is, indeed the case, that means that this rack has the potential to be used in our fireplaces beginning in mid-January all the way up to early February.